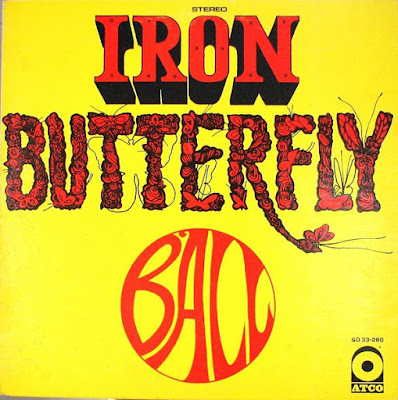 
During the progressive music revolution in the late 60s, one of the most surprising successes was that of Iron Butterfly. The band was formed by Doug Ingle, who added Ron Bushy, Lee Dorman and briefly, Danny Weiss. Together, they were arguably the first to amalgamate the terms 'heavy' and 'rock', following the release of their debut album called "Heavy" in 1968.

Later that same year, Weis left the band and guitarist Erik Braunn stepped in. When Iron Butterfly relocated from San Diego to Los Angeles, the band started to gain a live following and soon was gigging with the likes of The Doors and Jefferson Airplane.

Ball, - which surpassed "Vida", was less of a success, despite being a better collection of songs, notably the invigorating 'It Must Be Love' and the more subtle 'Soul Experience',  turning "Gold" record, climbed to No. 1 and remained on the charts for 44 weeks.
Classic-Bands


The band is at the peak of their fame in 1969. Their previous album In-A-Gadda-Da-Vida is still charting and this Ball album is even going to a higher raking than its world-known predecessor (sources differ since on the band's web-site, it is claimed to have reached the first spot, while other sources mention a third place).
The band should have been present at Woodstock as wel that year. Since they were stuck at an airport and that the situation around the spot of the festival was a total chaos, they asked to be brought back and forth to the festival site by helicopter; but this request was never truly considered by the festival organizers.

They probably missed a great opportunity to impress the world. I guess that In-A-Gadda-Da-Vida played at Woodstock would have had the same meaning for Iron Butterfly than I'm Going Home for TYA or Soul Sacrifice for Santana. But we'll never know.

The heavy psychedelia is always part of their sound (thank god) and as such, the opener In The Time Of Our Lives is probably the best you can get in here. They keep on with the music that was so influential to Mark I (Purple). While being a heavy track, it is a middle tempo one with a fine melody sustained by languishing keyboards.

The overall mood is also more soul oriented which is maybe not the best move they have made so far. The well names Soul Experience almost sounds as if it were coming out the Motown repertoire.

On this album, the production and the overall sound quality are much better than on their two previous releases and the music is more polished, but at times too syrupy IMO like Lonely Boy and In The Crowd. Again, Motown is just next door.

It is a pity because when the band stick to his basic psychedelic rock music, they are still able to produce fine numbers. I would just have liked to get some more like Real Fright.

At this stage of the album, Iron Butterfly tries to convince that they can still rock, but It must Be Love is only a passable song which is saved by a fine guitar solo. The overall heavy-jazzy beat can not really overwhelm me.

The next good song is the conventional and heavy Filled With Fear. It demonstrates that once again, they are much more at ease in this psyche rock mood that these ugly Motown sounds. The scary feeling provided by the backings is quite pleasant as well.

The closing number has some Doors flavour due the to the organ sound. It holds some burlesque mood as well and although it is enjoyable, we are not confronted with a masterpiece either.

This album features a couple of songs but I can hardly consider it as a good album.
by Zowie Ziggy

Sure there is no In-A-Gadda-Da-Vida, but there is a whole album better than that! and Ball IS that album! The songs are shorter but so much better in almost every way when compared to the previous album. Not to mention that the lyrics are superb.
All the songs from this album are more melodic and more psychedelic than the Vida album.

The opening track In the Time of Our Lives is a wonderful song and the opener of any Iron Butterfly album. This song is dark and sorrowful and was way ahead of its time.

Soul Experience is a beautiful track, one of Iron Butterfly's most melodic psychedelic song.

Lonely Boy is the only weak track off this album, although I am quite fond of it, but it is mostly a soulful song with a great psychedelic atmosphere and great guitar solo by Erik Braunn.

Real Fright is one of Iron Butterfly's more faster paced and darker songs. The title is pretty self-explanatory, the song is about being so deathly afraid to the point of going completely insane.

In the Crowds is the most pop oriented song off this album, but no more than the first half of In-A-Gadda-Da-Vida (such as Flowers & Beads, Most Anything You Want, etc...)

It Must Be Love is just simply one of their best.

Filled with Fear - Now onto Iron Butterfly's darkest and most powerful song. It pretty much continues where Real Fright left off, lyrically wise that is. It is about a person who is losing their mind to fear and knows it, but can't stop it. The only thing they can do is sit there and watch as their mind withers away.

Belda Beast is, in my opinion, Iron Butterfly's best song they ever recorded. It is completely drenched in acid and wrung out with the most melodic psychedelia the band ever attempted. It is sung by Erik Braunn with the most beautiful guitaring he's ever done. This is simply their most proto-progressive song.
Posted by Zen Archer at 8:40:00 PM