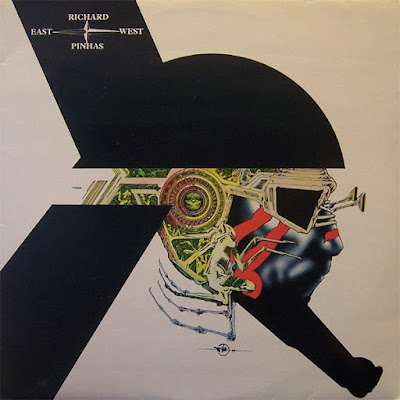 
For his last album of the 1970s, guitarist / provocateur Richard Pinhas incited a kinder, gentler form of musical dissent, just in time to exploit the dumbed-down expectations of a more accessible decade. It's not exactly techno-pop (although the song "West Side" comes uncomfortably close), but the album certainly represented a conscious effort to simplify the once radical manifesto of his erstwhile band HELDON.
Nine brief tracks (actually less: one was needlessly repeated) were squeezed into the album's 38-total minutes, with most of the cuts arranged in the radio-friendly four-minute range, including a DAVID BOWIE cover ("Sense of Doubt", from his "Heroes" album), and at least one misguided stab at the singles market. Needless to say, it was a major change of pace for an artist who only six years earlier had released an album appropriately titled "Électronique Guérilla".

A saving grace is the lack of digital instrumentation. Sampling technology would homogenize the music industry in the 1980s, but here the analog synths still retained their distinct character, and the textured rhythms even more so. "Sense of Doubt" carries its shambling beat in what sounds like a kitchen broom snagging on cheap linoleum; "Paris: Beautiful May" has a liquid castanet accent underneath its lilting synth melody and Fripp-like guitar sustains. (All the tracks, by the way, are identified geographically: New York, Kyoto, Paris and so forth. The Bowie song is linked to London, instead of the more obvious Berlin.)

And then there's "Houston 69", the only selection to feature an actual drummer: old comrade François Auger. But was the repetition of the track at the end of the album a makeshift bid for artificial closure, or compensation for the overall shortage of material? Maybe the song was included twice because it's the best thing here by far, with the restless momentum and alarming vocoder-vocals resembling a stripped-down, economically remodeled update of Heldon.

Whatever his motivation, there's something a little disturbing about hearing such an outspoken musical agitator poaching on territory previously claimed by the likes of VANGELIS or JEAN MICHEL JARRE. But the lack of any real challenge at least has a silver lining: it's the perfect first step for newcomers to the more seditious discography of Pinhas and Heldon.