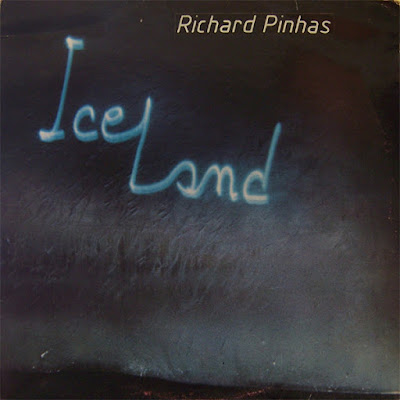 This late '70s solo album by ambient synth pioneer Richard Pinhas may not be the coolest album hereabouts, but musically it's definitely one of the coldest: in terms of heat-loss reaching the absolute zero degree nadir of Progressive Electronics.
The best ambient music (as defined by ENO and others) is meant to be inseparable from its surrounding environment, and here's a perfect case in point. The inspiration for the album wasn't the tiny island nation in the North Atlantic, but a more general evocation of the light and space of higher latitudes, from Spitsbergen to Point Barrow by way of Siberia.

Part One of the divided title track sets the mood with a short series of chords hanging frozen in mid-air, setting up a shivering monotonic sequencer pattern overlaid like hoar frost with synth 'strings' and sound effects. Each note is so finely sustained that the actual warp of the master tape is audible, something I had always heard as a flaw in the vinyl until I upgraded to compact disc. Like the world it depicts the music is austere but beautiful, and seemingly untouched by human hands.

"The Last King of Thule" (the title references the mythical northernmost inhabited region of ancient Earth) reveals an altogether harsher landscape, with an urgent, almost industrial rhythm track and lots of atonal Fripp-like guitar soloing. A pair of shorter soundscapes (one of them a mere 35-second transition) won't provide you any relief from the chill, but a glorious exception to the album's arctic mood can be found in the final track, "Greenland": a wonder of simple yet hypnotic sequencers, real drumming (thank you François Auger), and lush orchestral synths, warm enough to melt the polar ice caps.

Even more impressive, and almost as long as the original LP, is the CD-only bonus "Wintermusic", a study in icy abstraction borrowing from the minimalism of FRIPP & ENO (two idols of Pinhas from early in his career). The length of the piece may look self- defeating, but give it time: there's a meditative calm at the heart of all the unending, overlapping drones, making a fitting extended epilogue to one of the more effective albums from the analog synth era.
Posted by Zen Archer at 5:31:00 PM