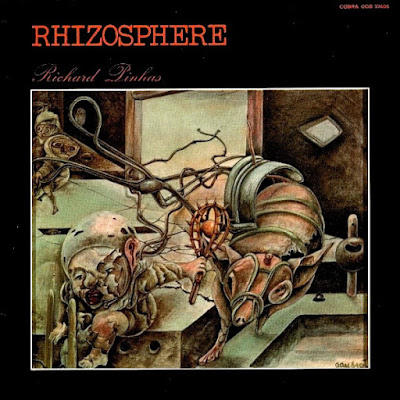 Electronic music pioneer and leader member of the legendary Heldon, Richard Pinhas also has a prolific career in solo. In 1977 e he released his first essay called "Rhizosphère" (whose name is inspired by G. Deleuze philosophy). The content is largely made of cerebral-obsessional electronic loops. Guitars are more discreet and the music is progressively getting more and more into a lysergic post-modern space odissey. The magnetic and seductive "Chronolyse" (1978) is a little classic and a good example of Richard Pinhas' hability to explore the complex droning quality of electronic sound textures. The hypnotic and entrancing "Events and Repetitions" (2002) can be considered as the French answer to Eno/Fripp collaboration in the minimalist ambient spectrum. The last opus "Metatron" (2006) perfectly combines Richard Pinhas guitar style (in the vein of Robert Fripp's weird manipulations) to sonic cyclical electronics. Outside of his solo career richard pinhas also founded the project «schizotrope» and released several CDs in collaboration with numerous artists such as Peter Frohmader (Fossil Culture, 1999), Pascal Comelade (Obliques Sessions II, 1999). Highly recommended for those who like sci-fi psych jamming, Heldon's propulsive neurotic-electronics and Eno/ Fripp duet.

'Rhizosphere' is machine music that sounds like it was recorded by one of those Drones from 'Tatooine' in 'Star Wars' in 1977.
Unlike his concurrent 'Heldon' band - there are no guitars used at all. This is purely electronic with a complete absence of vocals. 'Rhizosphere' displays all the technology and gadget twisting of 'Jean Michel Jarre' from the previous year with his groundbreaking 'Oxygene'. Thankfully it's mostly a lot darker in execution.

'A Piece for Duncan' verges on New Age Ambience in the style of Steve Hillages 'Rainbow Dome Musick'. Squeaks and bloops playfully doodle around the surface as a simple pretty echoing keyboard patters out a relaxing little tune.

Quite frankly, this whole album is far more listenable and pleasing than 'Heldon' to my weak and feeble ears that have been damaged beyond belief during the past 25 years of listening to 'difficult' music. As you can see it also displays a bizarre and wonderful front sleeve. It's meaningless, of course, but represents a surrealistic approach to the recording.

Swirling keyboards make up 'Claire P.' with a hypnotic and kaleidoscopic feel throughout. This is quickly followed by 'Trapeze Interference'. Being much darker and quite sinister, it's actually similar to early 80's Industrialists 'Konstruktivists' with its wind-tunnel, doom laden chords.

The 18 minute 'Rhizosphere' is a large slab of electronica played with a huge amount of heavily treated percussion, where every sound is squashed through electronic effects. Mostly 'flanger'. It is however, just a greatly expanded version of the excellent introductory track. It's all very 'Klaus Schulze' circa 1976. On a negative note, it gets too repetitive over it's lengthy duration with too few changes in direction to hold the listeners attention. The gradual but dramatic change in tempo is the only thing that warrants such a long track. Unfortunately it drags things down a bit.