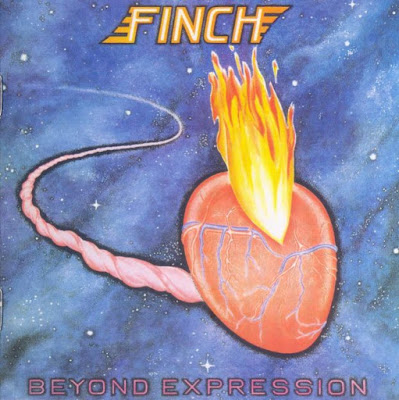 
Finch's second album certainly picked up where its predecessor had left things at, but it might just be that that they overeached themselves too. Indeed the group attacked their second album with the idea to go one further than previously, so they only did three tracks for Beyond Expression. Musically the album is tad rockier and a tad less jazzy, so you'll see more Yes-excess rather than Mahavishnu With an unchanged line-up and a cosmic "inner tripes" artwork, the group amounts the typical prog excesses they had just managed to avoid in their previous album. Don't get me wrong, unless you're playing these two albums back to back, this shouldn't be noticeable.

So, just three tracks (that's one better than the previous four) and the 20-minutes Passion Condensed (I'd hate to see the size of their passion extended ;o)p))))), the group is definitely keeping Yes in their vision, but in a pompous/bombastic way, ELP is almost in their line of fire, without sounding at all like them. Pure prog galore and yummy yumyum for the fans of such excesses.

The flipside is again more of the same, and Scars On The Ego (interesting title) it's now clear that Focus and Mahavishnu are not the focus of attention (unintended pun, but unavoidable too) of the quartet. This track starts slowly and tends to remain mid-tempo, even if Joop's guitar raises the sonic level to 11 in its second half. Van Nimwegen's influences are clearly Jan Akkerman, John McLaughlin and Steve Howe, his style is harder and sometimes this album has got me thinking of Colosseum II's debut album (without vocals), so I guess saying Gary Moore is also a possibility. The closing Beyond The Bizarre is the album highlight with plenty of drama and tempo changes

While the album sold still at respectable levels, its clear that BE was simply too close to GOIF, yet not as good either, but this is only noticeable if you compare the two actively. Still definitely worth throwing an ear on it, but remind yourself to pick it back up: it's messy for others and who knows?.. you might still need it again sometime soon. .
Posted by Zen Archer at 12:15:00 PM