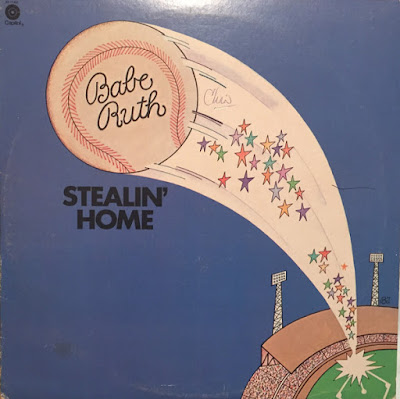 
"Stealin´ Home" is the 4th full-length studio album by UK hard rock act Babe Ruth. The album was released through Capitol Records in 1975. Main composer and guitarist Alan Shacklock left the band after the third self-titled album and I was really worried how "Stealin´ Home" would sound without his contributions.

As it turns out "Stealin´ Home" isn´t stylistically that far away from it´s predecessor. "Stealin´ Home" is basically a rock/hard rock album and the music style isn´t completely unlike the music style of Wishbone Ash (without the twin guitar attack). A kind of softer hard rock style. The vocals by Jenny Haan sound like a female Geedy Lee (Rush). She is a very skilled singer with a great rock mama attitude. The only element on this album that links the music to the semi-progressive rock of the early releases is the inclusion of keyboards/synths on some tracks which gives the music a slight progressive touch, best examplified on the opening track "It´ll Happen In Time". I can appreciate most of the album but I especially enjoy the tracks that emphasize the harder rock side of the band´s sound. When they slow things down my fascination drops. A track like "Can You Fell It" with it´s reggae rhythms is where I say stop.

The sound production is enjoyable, warm and pleasant. Overall "Stealin´ Home" is a decent release by Babe Ruth even though I would listen to any of the first three studio albums before this one.
Posted by Zen Archer at 5:13:00 PM