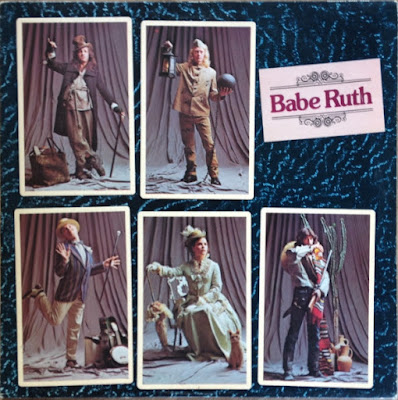 
After shipping the light-weight Amar Caballero LP, Babe Ruth sat dead-red on a hanging curve ball, sending a line-shot to the right/centerfield power alley with the release of their self-titled studio album in 1975.

Produced by Steve Rowland, the nine song Babe Ruth recording opens with the six-minute, hard rockin' "Dancer". Unlike the collection of mellow and funky cuts from Amar Caballero, Babe Ruth wasted no time gettin' back to ass kickin' action, with the Alan Shacklock penned "Dancer", which is chased by the amped-up "Somebody's Nobody". Little Janita Haan adds big vocals to the LP's second track, which breaks into a funky bass groove midway through the number. A pair of covers fill out side one, as Babe Ruth deliver a fast paced, in-you-face guitar onslaught remake of Ennico Morricone's "Fistful of Dollars", and a late night, slow blues cruise on Curtis Mayfield's "We People Darker Than Blue". Once more, "Jenny" Haan steals the spotlight with her vocal performance.

Side two of the Babe Ruth album kicks in with rapid fire riffing the drives the dirty deeds rockin' "Jack O'Lantern". Miss Haan brings a soulful singing style to the fore on the laid back cover of "Private Number", while "Torquoise", written by the Haan and bassist David Hewitt, carries a south-of-the-boarder vibe. Drummer Ed Spevock contributed the energized "Sad But Rich", and Shacklock's bluesy, five-minute ride on "The Dutchess of Oceans" brings Babe Ruth's third album to a close.
Posted by Zen Archer at 5:08:00 PM