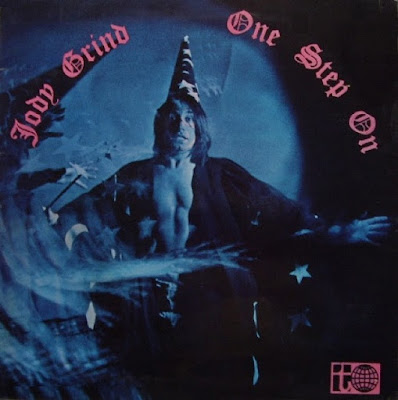 It can be a real enigma sometimes how some groups make it and others do not. For no apparent reason, a band who have originality, energy and some fine musicians manage to completely bypass any form of recognition or success. Jody Grind are a classic example. Formed in late 1968 by band leader and keyboard player Tim Hinkley, they released two classic albums which immediately sank without trace. Fortunately, today they are belatedly beginning to receive the recognition they deserve.

The music of Jody Grind is a sort of melting pot of Deep Purple, Chicago, Uriah Heep, Vanilla Fudge, The Nice and many others. It should be remembered though that Jody Grind are more leaders than followers, their albums predating many of the best known releases of those great bands.

The album opens with a stunning 18 minute suite bearing the album's title. This four part epic includes a wonderful cover of the Rolling Stones Paint it black, the other three sections being self composed. The driving brass and superb guitar work remind me a little of Uriah Heep's great Salisbury suite. The track oozes energy and originality, especially when you remember it dates from 1969. The brass sections were actually added after completion of the recording of the album, being arranged by David Palmer (later of Jethro Tull). My only minor gripe is the inclusion of a drum solo, but thankfully it is kept brief.

The following Little message continues the magic, the track once again focusing on the instrumental prowess of the band. Night today finally sees the band taking a breather, the song being a softer piece featuring more in the way of vocals. While it is a pleasant listen, it lacks the dynamics of those which precede it, and is very much of its time. Anyone who enjoys the obscure one album band Aquila will also enjoy this and the following track USA. The latter is a straight blues rock number featuring some good guitar work.

The album closes with a Chuck Berry tribute Rock'n'roll man, a thinly disguised cover of Johnny B. Goode. Once again some good if predictable guitar work, but the track is by and large the definition of filler.

In all, a tremendously exciting album which loses its way slightly in the latter part. The first 20+ minutes though are as good as anything you will hear from the period.

Incidentally, the band's name does not reflect that of any of their members, simply being the name of a jazz number by Horace Silver.
Posted by Zen Archer at 2:10:00 AM