Brand X
1982
Is There Anything About 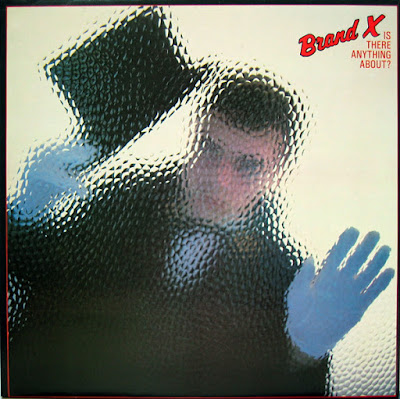 
Brand X has released some of the best fusion stuff ever. That said, this album, as stated in earlier reviews, sounds like some of the left-overs or outakes from "Do They Hurt", which in itself sounded like the left-overs from "Product". Not sure I understand slamming Phil Collins for HIS contributions, as Robin Lumley is the one who compiled this package -- it's almost a Lumley solo album with session players.
There are, however, a few bits that sound good, primarily the title track. "Is There Anything About" (the tune) is a great little jam, that almost sounds like it could have been a live track from "Livestock". Not a lot of substance, but it just cooks along, and contains just enough of that Brand X spontaneity and humor that the earlier material has.

"A Longer April" is just a band version of "April" from "Product" with guest Ravenscroft on sax; personally I like the shorter April more.

"Swan Song" may have been more appropriately titled "Modern, Noisy and Effective", which in itself is an instrumental reworking of "Soho", utilizing the backing track from that song (but not nearly as good a melody).

The one track that needed not ever be released is "TMIU-ATGA" ("They're making it up as they go along"), which is one of the worst tunes I think I've EVER heard by ANY band (and CALLING it a tune at all is generous).

This album IS available on CD, although it is definitely NOT the release to introduce new listeners to the band. Completists might be pleasantly surprised that there IS SOMETHING ELSE about.
Posted by Zen Archer at 11:09:00 PM