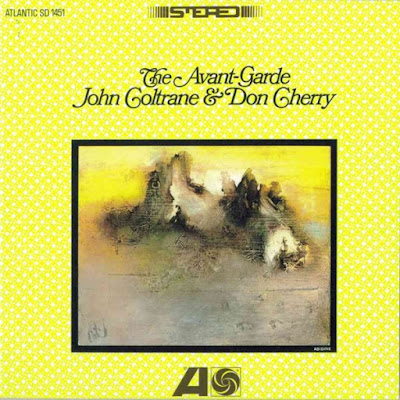 
This album is rightfully co-credited to Don Cherry (trumpet), who ably trades blows with John Coltrane (tenor/soprano sax) throughout. The Avant-Garde also boasts the debut studio recording of Coltrane playing soprano sax -- on "The Blessing" -- in addition to his continuing advancements on tenor. Although these tracks were recorded during the summer of 1960, they remained shelved for nearly six years. Joining Coltrane and Cherry are essentially the rest of the members of the Ornette Coleman Quartet, Ed Blackwell (drums) and Charlie Haden (bass) on "Cherryco" and "The Blessing," as well as Percy Heath (bass) on the remaining three selections. This is fitting, as over half of the album consists of early Coleman compositions. Coltrane's integration into this band works with some extraordinarily fresh results. Neither Cherry nor Coltrane makes any radical departures on this album; however, it's the ability of each to complement the other both in terms of modal style and -- perhaps more importantly -- texture that lends heavily to the success of these sides. Cherry's brisk and somewhat nasal intonations on "The Blessing" mimic those of Miles Davis, albeit with shorter flourishes and heavily improvised lines. When combined with Coltrane's well-placed -- if not somewhat reserved -- solos, the mutual value of both is dramatically increased. Blackwell -- the only other musician besides Cherry and Coltrane to be featured on every track -- provides some non-conventional percussive accompaniment. His contributions to "The Blessing" and workout on the aptly titled "Focus on Sanity" are primal.