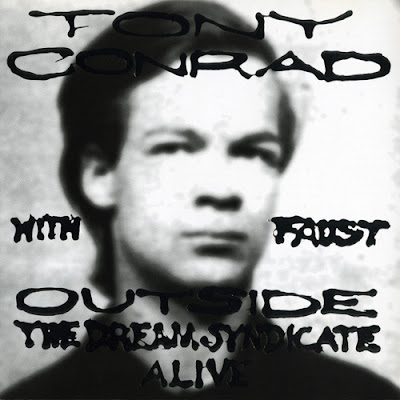 Recorded live at Queen Elizabeth Hall in London in '95 this was the reunion of one of minimalist's great torch holders Tony Conrad along with one of experimental rocks greatest bands Faust. When they originally teamed up at a German filmmakers request, they made Outside The Dream Syndicate over three days together in 1971. A landmark record that took Conrad's affinity for building drones mixed with a rhythm section that added intense pulsations and textures to the sounds.

While apparently Faust didn't really remember the recording sessions (what were they on?) they met up only two more times since the original recording to perform the piece live. This show was the third and last time they performed together and at this show they were also joined by the helping hands of Jim O'Rourke (is there a band he hasn't played with?). And wow! What an amazing show to have been at. With his La Monte Young cap on tightly, Conrad masterfully created a piece that no matter when it was produced evokes such a strong physical reaction. This is raw, building, blistering, pounding, droning brilliance! The way momentum keeps building works its way into your body and about half way into the piece you can't stop from getting completely wrapped up in it. The droning violin, the dirty percussion, the gut wrenching passion underneath and above it all!

It's amazing how in these sounds you can hear so much of a handful of contemporary favorites: Godspeed You Black Emperor's explosive drama, The Dirty Three at their most wild and rocking, Swans/Angels Of Light's blistering poignancy, but it all ends up seeming sorta like little league in comparison to the blood and guts that oozes out of this performance. As always Table Of The Elements appropriately package the cd with the care it deserves including some nice short conversations with Conrad and two great stickers of Conrad's face. Absolutely recommended!
Posted by Zen Archer at 10:21:00 PM