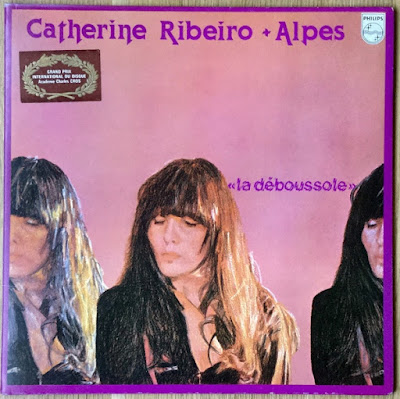 
Eleventh album of Ribeiro & Alpes, and for this writer, the last one worth a listen (the next albums are non-Alpes album) and gets even closer to standard Chanson Française. With Mollet and Lemoine still in the writing dept, Ribeiro gets systematic writing credits of her own, showing her increasing control.
While the cellos and other drone instruments are long gone, this album's prime singularity is the funky (almost Kobaian) bass that seems to dominate these the short tracks. Many of the tracks are simply vehicles for Ribeiro's excellent voice (here recorded a tad too loud, IMHO), but there seems to have a slight inspiration problem. It sounds like Catherine had loved to death the previous year's movie of the Broadway musical play Haïr, mixed with some Jacques Brel at times. Tracks like Ne Pas Partir and especially « Dis moi qui tu embrasses », where the opening verses of "Let The Sunshine In" intro of the finale of Haïr are very familiar. This of course is not accidental as the bass is also very reminiscent of the movie's score adaptation. While a good deal of these tracks are still entertaining, few are "prog" except for La Nuits Des Errants. Clearly of most interest for progheads in this album is the rework of 72's Paix track, which gets a good modernized revisit part of which is due to the general uplifting of Alpes' line-up. Ribeiro really unleashes in it with some Janis-like squeals, which draw some near orgasmic spine chills. Different but just great as their first version, this will also be Alpes' last piece of bravado.

Understandably so, with the music scene changing severely, the shift of power was inevitable towards shorter sung songs and therefore the tongue-in-cheek tile of La Déboussole (the un-compass). Unless a total nutcase for Ribeiro's vocals (this is very understandable), I'd recommend progheads the greatest care in venturing further than La Déboussole. Catherine will record homage albums to Edith Piaf and a few others (all very worthy), but we tend to slip severely away from the focus of this site.