Basil Kirchin - 2003 - Quantum: A Journey Through Sound In Two Part

Basil Kirchin
2003
Quantum: A Journey Through Sound In Two Parts 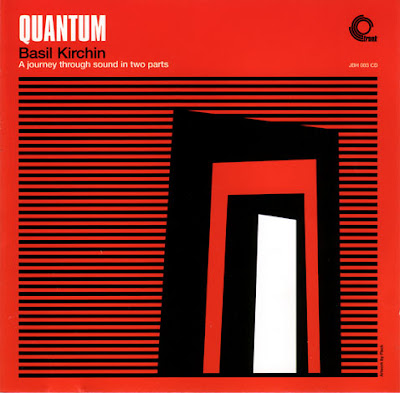 Notes
A journey through sound in two parts. First issue of this recording made circa 1973.


Basil Kirchin's two experimental LPs from 1971 and 1973, both titled Worlds Within Worlds, have long been out of print and near impossible to track down. Quantum, recorded in 1973 and not released until 30 years later, offers another glimpse at Kirchin's oeuvre of sonic weirdness, which borrows from free jazz, musique concrète, and a lot of other things for something quite undefinable. The first side, titled "Once Upon a Time," starts off with the squawking of geese before a gentle drone calms things down, then a child's voice repeats "something special will come from me." More bird noises are mixed with some skronky free jazz that builds with intensity, with an ominous organ drone thrown in. At times, the horns and the bird chatter become so entwined it's hard to know which is which. Flip the record over, and again one long piece fills up the side. "Special Relativity" has less of the birds, but more noises from the autistic children Kirchin recorded off and on in a ten-year period in Switzerland. The piece moves from simple, childlike melodies to sections where the strings and brass get into intense, free-form freakouts, while the voices can shift from calm and playful to frantic. The shifting emotional mood gives the piece a theatrical quality as it moves from one strange tangent to another. Though only four musicians are listed (buried in Kirchin's liner notes, at that) at times it sounds like an entire demented orchestra is at work. One might compare him to Ghedalia Tazartes, as Kirchin has created a unique work that's unlike anything else.

Although there hasn’t been a Basil Kirchin release for over 30 years, his reputation is still intact as one of the most innovative and influential composers of the late 20th Century. This release is possibly his finest hour. It’s certainly his weirdest. His last releases, in 1971 and 1973 are both rare and highly influential. This is the man who discovered a new way of listening and a whole new sound - with his unique mixture of jazz and field recordings he became a key influence in the development of Brian Eno’s famous ambient works, and also a major influence behind the industrial movement of the mid seventies, for bands like Nurse With Wound. His influence does not stop in the seventies - bands such as Broadcast are now citing Kirchin as an influence, while artists involved in this project include the hugely important Evan Parker, Darryl Runswick, Kenny Wheeler and Graham Lyons. The result is a very different and occasionally harrowing journey through sound. Beautiful and often extraordinarily dark, imagine an early 1970s version of Aphex mixed with a bit of Bjork. Check.