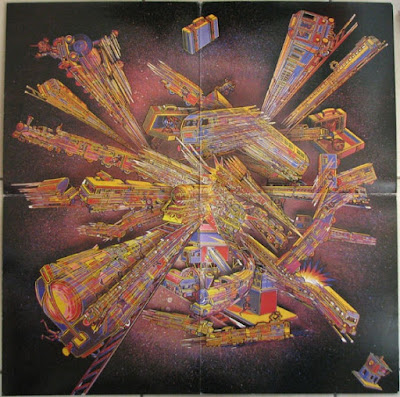 Fourth album recorded almost 5 years after A&C, but Albert keeps almost the same team, even if he lost François Ovide (guitars), replaced by Jacques Garret; and by now Herouville was a little passé so he changed studios, but it wasn't enough to change much to Albert's musical adventures. Again there are a bunch of shorter tracks, but the would-be title track is well over 8 minutes-long. And the original artwork has been changed apparently

Opening on two almost instrumental tracks, the first being about waking-up in the late morning and the music is fittingly relatively simple (by Marcoeur standards) as is the following Téléphone Privé. The album-long Joseph takes a different and repetitive beat and a harmonium and its dronal sonorities slowly bring new sinister moods that were not yet part of his vocabulary. The impressive Con Que J'étais dives into the breach and develops the new grounds and most likely Albert has heard Univers Zero and Present by now. And that track is easily the best track on the album. Ballade A Jean however returns to previous ambiances, as most of the rest of the album. The end of the album is less interesting with Bonne Entente and Comme Avant (like before) that nail the debate shut and ends like previous albums. Just another worthy album in Marcoeur musical endeavours, one that still hovers between Zappa, Samla, Area, Stormy Six and more of the same, even (and that's new) Univers Zero, but it's good to see that the RIO people kept a strong stance throughout the 80's and never allowed themselves to use that decade's dreadful studios techniques and samplings.