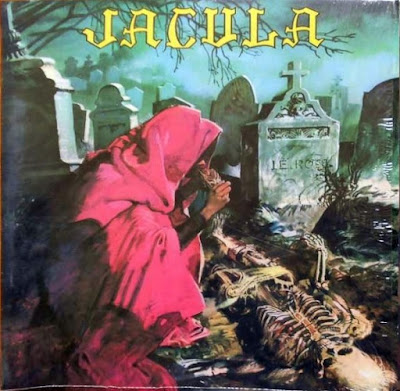 Jacula ends with a haunting masterpiece
Not just an album. Out of this world! Jacula (later Antonius Rex) represent one of the most original and underappreciated groups of the '70s Italian scene and that's saying something. Controversial but above the fray. Beautiful but full of nightmarish impressions. A road map to certain points in the dark world brought to you by an artist who graduated from Milan Catholic University with a degree in Philosophy, and the green-eyed Goddess who would become his wife, his writing partner, vocalist, violinist, flautist, and keyboardist. The team was joined by the 68 year old eccentric who brought the traditional church organ to this piece of music history. In reading about the band I've seen many people belittle them for mostly unfair reasons, as both this and their previous work are spectacular. In fact an album like this reminds me just how positively boring many of today's most popular bands are to me. This on the other hand was music for the ages recorded for free spirits by those who would not compromise. It was, and is, a perfect moment that could just as easily have been lost to history. But those who know better would not let it perish.

"a highly experimental collective centered on Antonio Bartoccetti and vocalist/violinist Doris Norton, who uniquely pushed the boundaries between progressive, gothic and classical music. Their compositions were elaborate and dark, written by Bartoccetti, one of the Italian prog rock scene's most charismatic figures, and drenched in the blood red, funeral church organ of collaborator Charles Tiring. .their second album has an uncomfortable, spectral atmosphere. [Record Collector's Ian Abrahams]

It is written that after the first Jacula album in 1969 (see my review for some background on this band) Antonio Bartoccetti and Doris Norton took some time off. They traveled around Europe visiting old castles and returned to the Marches area where they found one to live in. It is at this location in 1971 where they began composition of this second and final Jacula album and again they note the use of séance in their writing. In '72, now into the classic years of the Italian prog scene, they rejoined organist Charles Tiring and medium Franz Parthenzy in Milan's Angelium studio to record their new work. It was nearby at the Teatro delt'Arte where they also performed their only concert under the Jacula moniker, where a small crowd was treated to a show described as "magic" and "hypnotic." Material was performed from both of their albums. This second album is arguably stronger than their fine debut, perhaps more daring, and shows improvement in their skills of performing and arranging. It was a musical discovery for me that I simply have to share in some detail.

The lone five tracks (plus the bonus) that make up this dark, atmospheric feast are more focused than those on the debut. There is more urgency and greater dynamic variation. Rather than being on a path all their own as in '69 Jacula were now surrounded by the peak of the RPI movement. With all of the influences and activity around them they could have morphed into something more commercial; instead they doubled down and produced an album of unbelievable sincerity. They even dropped much of the Sabbath like electric guitar from the first album, probably because Bartoccetti didn't want the comparisons. He has said that he enjoyed Iomni's guitar style but that it was squandered a bit on the trappings of a rock band's repetitions. Jacula fiercely stays away from any commercial intention here with an avant-garde mixture of classical and progressive styles. Side one is Jacula at their most intense in places: Charles Tiring again glows with majesty on the church organ, harpsichord, and Moog. In UFDEM he plays more intently than on the first album which could sometimes be laid back in vibe, no such feeling here. Bartoccetti adds in some wicked bass slides here, but the main attraction is Norton's fierce vocals, she just pours herself into it. All of Norton's vocals go beyond "singing" which often is mostly entertainment; she truly communicates.she channels emotions and images. "Praesentia Domini" begins with a gorgeous mix of synth and organ but then turns into one of Jacula's most sinister tracks. Norton and Bartoccetti begin a spoken word chant that sounds like a ritual summoning or perhaps a séance but the effect is really creepy for those with tender ears. The chanting is Latin and just increases with intensity joined by disturbing Moog (?) effects before the organ comes back for a dramatic ending. There first two tracks may be difficult for newbies but hopefully listeners will endure to side two which is more forgiving-just remember, give yourself time to get used to their sound, it grows on you after a spell.

Side two is where "Tardo" really becomes a solidified classic and betters the first album a bit. In "Jacula Valzer" Doris Norton's wistful, seductive, other-worldly vocalizations float atop a strange mixture of flute, guitar, and effects. The melody here is just mind bogglingly cool.it feels like childhood innocence being lost to some kind of madness or mayhem.it feels like danger disguised as a siren song. It is a break in the heaviness of the music around it and yet it is no break at all, but rather an illusion of levity. From this ethereal foreboding it just gets more and more delicious. "Absolution" begins with these amazing male choired vocals that instantly brought to mind what Therion would do decades later. (This is a bonus track on the newer BWR editions that is placed in the middle of side 2, but it's such a great track it actually strengthens the album to a significant degree-don't buy an edition that doesn't have the bonus track.) The beautifully haunting vocals are soon joined by the pipe organ and a peaceful guitar chord sequence. The effect of these gothic vocals and repeating guitar pattern are hypnotic, mesmerizing. Near the end is one of Bartoccetti's wailing SG solos, used much more sparingly here and thus more effective. As if that one wasn't awesome enough "Long Black Magic Night" is the rose on this black marble alter that is side two. Just fantastic. It begins with a flute solo that says so much in the melody.again, it feels to me like a soul wandering across a foggy moor, or like a person coming to terms with an ending (or beginning?) Haunting flute leads to Doris's vocal in English this time, over her own violin that sounds amazingly like someone crying. Her accent is heavy as some have noted with derision but the vocal is absolutely effective anyway. It's like she's reciting something in a sad, detached way that sort of lulls you to trance. She closes with the prophetic sentence "the long, black, magic night has begun." After a short pause she repeats the sentence a second time but you hear this brilliant twist on emphasis. The first time the sentence is delivered in a sort of monotone recitation style as the whole track was. But after the pause when she repeats the sentence, you hear a chilling excitement rise in her voice like a vampire whose spotted blood. Very subtle, but you can hear her go from a narrative to character mode, seemingly thrilled that the "magic night" has begun. You can practically see her face changing from solemn to mischievous grin as her words are followed by a loud ominous low end reverberating note. Closing the album is the beautiful "In Old Castle" which is another long Charles Tiring organ work that allows the listener to decompress a bit after the unease of the previous three tracks. This one sounds a bit more like the debut album-who'd have thought I'd ever fall in love with the sound of an old man playing church organ unaccompanied. So it's not jaw dropping complexity.it needn't be. On the whole, a stunning piece of work.

This second and last Jacula release is a masterpiece in my world, if there ever was. When you read people at other sites trying to write this off as "bad horror movie music" you can be assured they haven't done their homework. Even in the height of the Italian classic period, prog's finest moment to some of us, this album stands out not as typical symphonic progressive but as a true original of dark experimental sound. One blogger wrote that this album "achieved its mood without hokiness or even a hint of self-mockery." Absolutely right. Jacula handled their material with a deep respect, something than Antonius Rex did not always do in my opinion. In a transcript from a 2003 Belgium radio show, the unnamed host proclaims "This is my favourite album of all time (to be followed by Saint Just and Comus.) If I could only save three recordings from this world it would be those three. I read some reviews of it. And I have to say, some songs are not understood at all." Amen to that. This album to me is right up there with "The Piper at the Gates of Dawn" as one of the most misunderstood and underappreciated classics ever released. It is for open-minded and adventurous listeners who long for something truly different from the sea of predictable prog-rock with the professional eye-candy album covers. To say it made an impression on me would be an understatement. As mentioned in my review of their first album just be prepared to truly listen, as you would at a chamber music recital. Jacula is not rock and roll.

Be sure to look for the 35th anniversary edition which is a Japanese mini-lp sleeve that comes with a cool booklet, an awesome bonus track, and a bonus video directed by Doris Norton. Jacula may well be a love/hate experience for many listeners but for those who dig it, oh man..
Posted by Unknown at 4:46:00 PM