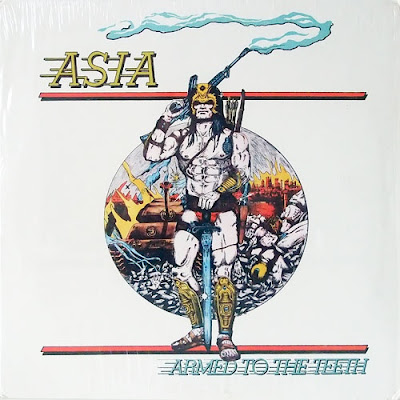 
Trying to follow such an awesome debut album would have proved a difficult task in the hands of lesser mortals, though there were no such problems for Asia. In fact, 'Armed To The Teeth' picked up where the debut left off, and saw the band progress, if you'll pardon the weak pun, to even dizzier musical heights.

Opener 'Thunder Rider' gallops along at an exhilarating pace swiftly followed by the melancholic 'Xanadu' - definitely not to be confused with the turgid Olivia Newton John effort (sorry ONJ fans if any of you are actually reading this!!). 'Paladin', the band's second single, is commercial AOR tinged pomp, with its unforgettable chorus proving that the band can mix it with the best of 'em. The magnum opus and live favourite 'Genghis Khan' is indicative of the band at their musical zenith. This bombastic hard rock contrasts nicely with the plaintive closer 'The Bard', even if it's Shakespearian narration at the end does come across as slightly pretentious. Things were looking decidedly rosy for the band. With 'Armed To The Teeth' as their crowning glory and the fact that 'Paladin' was starting to gain airplay on local radio stations the band were understandably in high spirits.

Then fate dealt a cruel hand. Without prior warning NBC announced news of an English 'supergroup' also called Asia formed by ex members of ELP, Yes and King Crimson. Radio stations promptly dropped our Asia's single like a hot potato and the band scrambled to meet with their lawyers to register their trademark application in the name of Asia. Various communications with Brian Lane (ex-Yes manager) followed, and at one stage it is understood he tried to dupe the band into believing a Louisiana band already owned the rights to the name (this subsequently proved bogus). Having originally demanded $100k to give up rights to the name Asia, the band were eventually forced to accept an offer substantially less than this together with a promise from Brian Lane that he would negotiate a major record deal on their behalf (Atlantic and Geffen were the targets). At last, it seemed that the band would finally get the break they so richly deserved. However Brian Lane failed to deliver on his part of the bargain and despite numerous calls to his offices, no deal was forthcoming. In a final twist to the story, the band were stunned to find out that their trademark application had been accepted and they had exclusive ownership of the name Asia. Legal wrangles followed but it was a case of David versus Goliath. Sadly, in this case Goliath won as Mike Coates et al were in no financial position to contest a costly international suit despite touring under the name Solomon Kane to raise funds for legal bills. By early 1983, the band had grown weary of the fight and decided to call it a day - a sad indictment against the music giants. I wonder if the UK Asia were ever aware of the consequences brought about by their choice of moniker.
Posted by Unknown at 8:21:00 AM