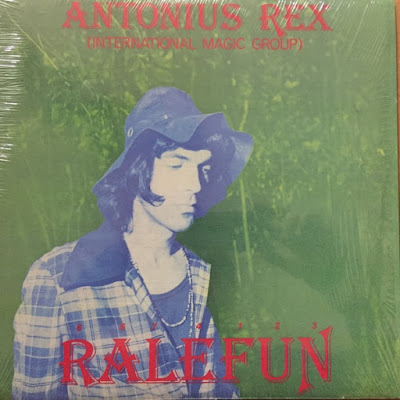 
Having been a big fan of both the Antonius Rex and Jacula projects (the first Jacula album is easily one of my absolute favourites) for many years now, I was very excited to grab the reissue of this album when it released a little while back. I'd only ever read mostly negative reviews about it, but for some reason I was always deeply fascinated to discover it for myself. Up until the re-release, I doubted that I would ever come across the album, due to it being so rare.
To begin with, the album sounds almost nothing like any other Jacula/Rex album before or since, having more in common perhaps with traditional Italian prog albums. It's not quite as heavy and oppressive, and the occult elements are very much toned down to be almost non existent for much of the album. Instead it has beautiful melodic electric guitar solos, spacey keyboards, very pleasant vocals and ferocious flute playing! The album is actually full of an uplifting romanticism, with only occasional dark touches.

The first track `Magic Sadness' reminds me for some reason of the Solaris `Martian Chronicles' album, although that was years later. Wonderful keyboard sections on this track that repeat a few times. Fully instrumental, it's a very striking opening and it grabs your attention straight away. The simple drumming reminds me a lot of Nick Mason, not the only moment on this album that reminds of Pink Floyd.

After a spoken word intro, `Agonia per un Amore' makes me think so much of P.F.M, with very warm vocals and acoustic guitar playing. Doris Norton's sparse piano is very engaging, and the beautiful flute playing are two wonderful highlights on this track. Anyone who likes Italian prog albums would enjoy this simple but effective piece very much.

`Witch Dance' has some guitar riffs that remind a little of Black Sabbath, and it's one of the heavier tracks on the album, which some terrific wailing solos and even more of that busy flute, it really takes off on this one! Despite the title, and Bartoccetti proclaiming `You are my black witch!' many times throughout the track, it's not very dark or sinister at all, actually almost comical, though I doubt that was the desired effect they wanted!

Perhaps my favourite track on the album, `Incubus' has many great simple guitar moments repeated over and over, and some gorgeous piano and organ in the middle from Doris. There also a slightly annoying overuse of a bat sound effect throughout parts of this one, but it helps add to the slight uneasy tension and drama of the track.

`In Einsteinesse's Memory' is a more upbeat track, with an almost dancey/disco beat and endless flute soloing, the electric guitar playing off it a lot of the time. Once again Bartoccetti's simple vocal is very warm and melodic, nice to hear him actually singing like this. Not many other moments like this on their other albums.

The last track ` Enchanted Wood' is the most experimental piece of the album, a 12-minute near ambient piece, filled with both natural, perhaps forest sounds, and also slightly ominous and unsettling unnatural effects, creating a very ghostly and hypnotic atmosphere. Very mysterious and fascinating. Very low-key guitar improvisations and spacey keyboard. All the players get some very subtle and effective moments on this track.

Overall the album is highlighted by the terrific flute and organ/piano playing throughout, and the presence of acoustic guitar on some parts of the album adds a very warm sound to this album, which is unusual in comparison to many other Rex albums. The music is not exactly complicated, but much of it is very melodic and tasteful, making it a good album to having playing in the background, to be able to enjoy on the surface without having to listen intently to complicated arrangements and time-changes.
Posted by Unknown at 5:35:00 PM