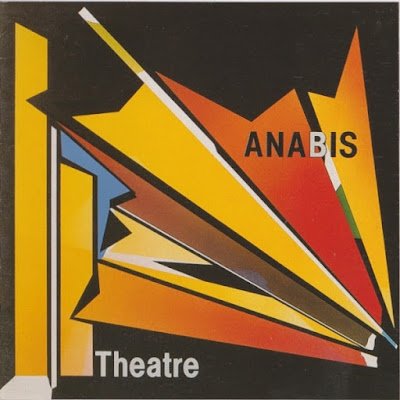 German band Anabis released three uber symphonic albums that don't seem to get a whole lot of love from progressive community partly due to their AOR leanings. Of course that hardly bothers moi as I find both 1980's 'Heaven On Earth' and 'Wer Will' from 1982 intriguing albums that combined mid-era Genesis with Anyone's Daughter housed in striking cover art to boot.
A fair amount of time passed when their final effort 'Theatre' appeared in 1988 with drummer Mike Morkel the only original member augmented by wind player Bertrand Cazeneuve and bass/keyboardist Werner Eismann as well as rather large cast of studio musicians.

With a loose concept based on France's Black Virgin tale; 'Theatre' never gets bogged down in storytelling and sounds more like a pop album with progressive tendencies than the other way around.
Clocking in at just under thirty-eight minutes, the disc feels heavily programmed including the snappy drums that gives the set that unmistakable eighties hi-end crackle. Not a problem although guest vocalist Andreas Sommavila's broken English can be difficult to bare but not enough to deter 'Theatre' as an attractive investment. Opener 'Theatre/Still On My Mind' has a bit of Supertramp in its musical fabric while the Camel-ish 'Theatre/Dream Of A Dancer' flirts with an appealing fusion touch which makes a second appearance on 'Black Virgin (Second Dance)' just to keep the listener on its toes.
The deep swelling synths that anchor 'Struggles Of Love' offer up an inventive mid-tempo ballad marred only by the aforementioned wince-inducing vocals. The follow-up 'Stronger Than Ever' continues down the poppy path with a big hook and melody I know I've heard somewhere before, a Berlin or Time Bandits album perhaps? Not sure but weighing the CD's AOR moves against its fusiony classicism; 'Theatre' is as fine example as any of the softer end of the German prog rock spectrum circa 1988.
Posted by Unknown at 3:12:00 AM