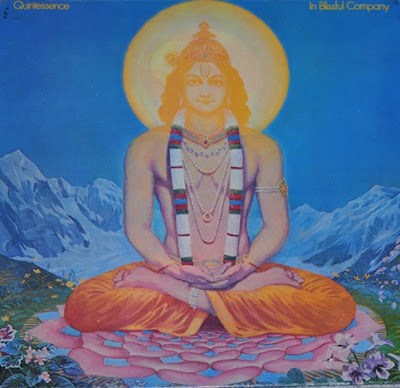 Standing in the shadow of bands like Floyd or Procol and emerging in the late sixties hippie underground scene heavily inspired by Indian culture this wonderful band has been all too often overlooked and underestimated. But in some way they had been far ahead their times in what they were doing and might be considered highly influential for what would be known many years after as world or new age music (as Chris Welch, busy for MM in those days pointed out in his liner notes for the CD re-release). In fact those guys had been brought together by an announcement in Melody Maker magazine and lead vocals of Australian born Phil Jones (aka Shiva Shankar) as well as the delightful flute play of Ronald Rothfield (aka Raja Ram) should become characteristic for their sound. The line-up had been completed by Alan Mostert on lead guitar, Dave Codling (aka Maha Dev) on rhythm guitar, Sambhu Babaji playing bass and Jeremy "Jake" Milton on drums. Soon after their foundation the band signed to Island Records later better known for hosting bands like Jethro Tull for example. Picking up eastern influences in the music of the "Fav Four" inspired by Harrison's India trips and reinforcing the general fashionable trend of late sixties psychedelic bands they created a kind of perfect "quintessence" of western pop/rock/jazz and Indian raga music. Though they've been mainly attracted by Hinduisms also spiritual influences by Buddhism and Christianity can be found in their songs. During their heyday they managed to fill places like the Royal Albert Hall with their splendid concerts and they also played at the prestigious Montreaux Jazz Festival.

The balance between east and west in their music used to be shifted more in favour of western influences making it quite approachable for people being not that much familiar with Indian classical spiritual music. This applies even stronger in the case of their remarkable debut from 1969 here in review. In fact there's only one traditional chant on here with track no. 5 titled not so imaginatively as such. The opener "Giants" presents a nice blend of song-based Indian flavoured psychedelic pop and some more jam-oriented elements and one can easily imagine that this song might have inspired contemporary bands like Ozric Tentacles as well as some more commercially directed one like Cornershop, Kula Shaker and so on. In "Manco Capac" Raja Ram's shiny flute play comes into action and this track offers in particular a great bluesy break by Alan Mostert. "Body" comes closer to hard rock territory in terms of the guitar sound but nicely balanced by Shiva's vocals and Raja Ram's flute as well as some occasional keyboards (which were usually only sparsely present in their music). One can imagine a mix of Cream and Tull here. Revealing stronger eastern touches "Gange Mai" is a more playful and highly rhythmic track getting into a type of repetitive, hypnotising mood especially due to the vocals and the flute. But there's as well a lot of rock to be found here. "Chant" has droning sitar tunes and combines a "Hare Krishna" routine with an old English carol making up to a wonderful unification of eastern and western spiritual culture. In "Pearl and Bird" Shiva presents his strongest vocal performance on this record revealing an extraordinary range of his voice. "Notting Hill Gate" which had been released as well as a single quite reminds to what Jade Warrior did on their first two albums one or two years after with the difference of sitar added here. The original edition had been concluded by the ambitious track "Midnight Mode" starting with some chanting followed by an extended flute solo and some guitar jamming. It finally fades out with some continous heavy drone. That one together with "Chant" is certainly the least accessible track on here. The CD re-issue contains as bonus the single version of "Notting Hill Gate" and its B-side "Move Into The Light" sounding very commercially though and not really worth mentioning.

Though probably being not really an essential one in Prog "In Blissful Company" should be considered an excellent debut of an usually forgotten band that combined religious and spiritual influences with psychedelic and early progressive rock music in a highly appealing (at least for me) and approachable manner. Certainly this kind of music will not appeal to everybody - rock fans might find it to esoteric and for puristic followers of raga prog it will probably sound too poppy. Nevertheless I think this band (especially their first two albums) should not be dismissed by anyone who doesn't mind some eastern flavor in his Prog.
Posted by Unknown at 4:30:00 PM 9 comments: Links to this post