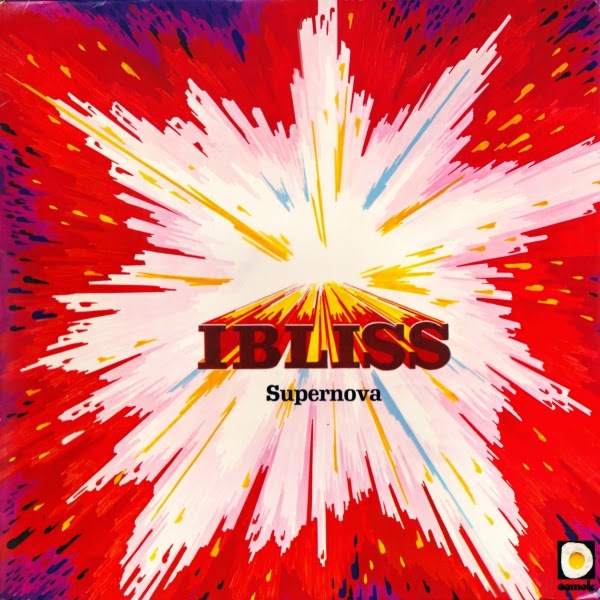 
German ensemble Ibliss created a heavily jazzy voice within the psychedelic atmosphere that wrapped and shaped the psychedelic atmosphere of krautrock back in the late 60s and early 70s. This band is tightly sustained on the standard of jazz-fusion and jazz-rock, closely related to the 1st Annexus Quam, post-"Opal" Embryo and Xhol. "Supernova", while not being as brilliant as any of Embryo's efforts nor as magical as Annexus Quam's debut album, definitely displays a focused appeal that should be very appreciated by inquirers in the jazzy side of early German prog rock. Actually, the fact that one of the Ibliss guys (percussionist Basil Hammoudi) was part of pre-Kraftwerk act Organisation makes it clear that he was in no small degree responsible for the elaboration of the aforesaid band's ethnic side. Now, in Ibliss, the terrain is proper for a further development of this type of sonority. With two members recurrently in charge of the percussion department and two more adding extra percussions, it is no wonder that rhythm and cadence play such a big role in the tracks' bases and developments. The writing process seems to have been minimal, mostly based on the repetitive installation of a simple starting point, with the full band going on with it in order to create some sort of trance for the mind and the spirit. The opener kicks off with its abundant tribal pulsations, taking some time to gradually reinforce the powerful beat: halfway through the punchy guitar and the agile sax phrases enter in to explore the psychedelic potential of this ambience. The abrupt ending is a perfect culmination for this manifested enthusiasm. Track 2 goes to more serene places, changing the firs track's African vibe for a mysterious elaboration of Latin-jazz ambiences. This is the moment for the sax to steal the limelight with its controlled soloing: fresh and at times moderately aggressive, constraint is its major asset. A track like this wouldn't have been out in place on any Embryo album from "Rocksession" onwards. The intimacy alluded in 'Drops' is accentuated in the fade-out that follows after the cosmic interlude that previously worked as a false fade-out. 'High Life' starts the album's second half, going for a more American feel, funky-based in a Weather report-esque sort of way. The mid tempo pace allows the band o dig deeper in its evocative side: the recorder soloing states a lyrical color to the whole picture. The last 9 minutes are occupied by the languid 'Athir', a piece that finds the quintet getting closer to the realms of soft psychedelia with Indian trends: something akin to Yatha Siddra. The percussive foundation is quite hypnotic, with the whole band sounding like an exorcist that summons spirits from out a dream. The guitar feels at home with its subtle lines and evocative arpeggios going around the sax and flute solos. If we pay attention to his album's tracklist, it is a gradual journey from exaltation in the light of day to the quietness of the night. This is a real lost treasure waiting to be appreciated by prog fans all over the world. 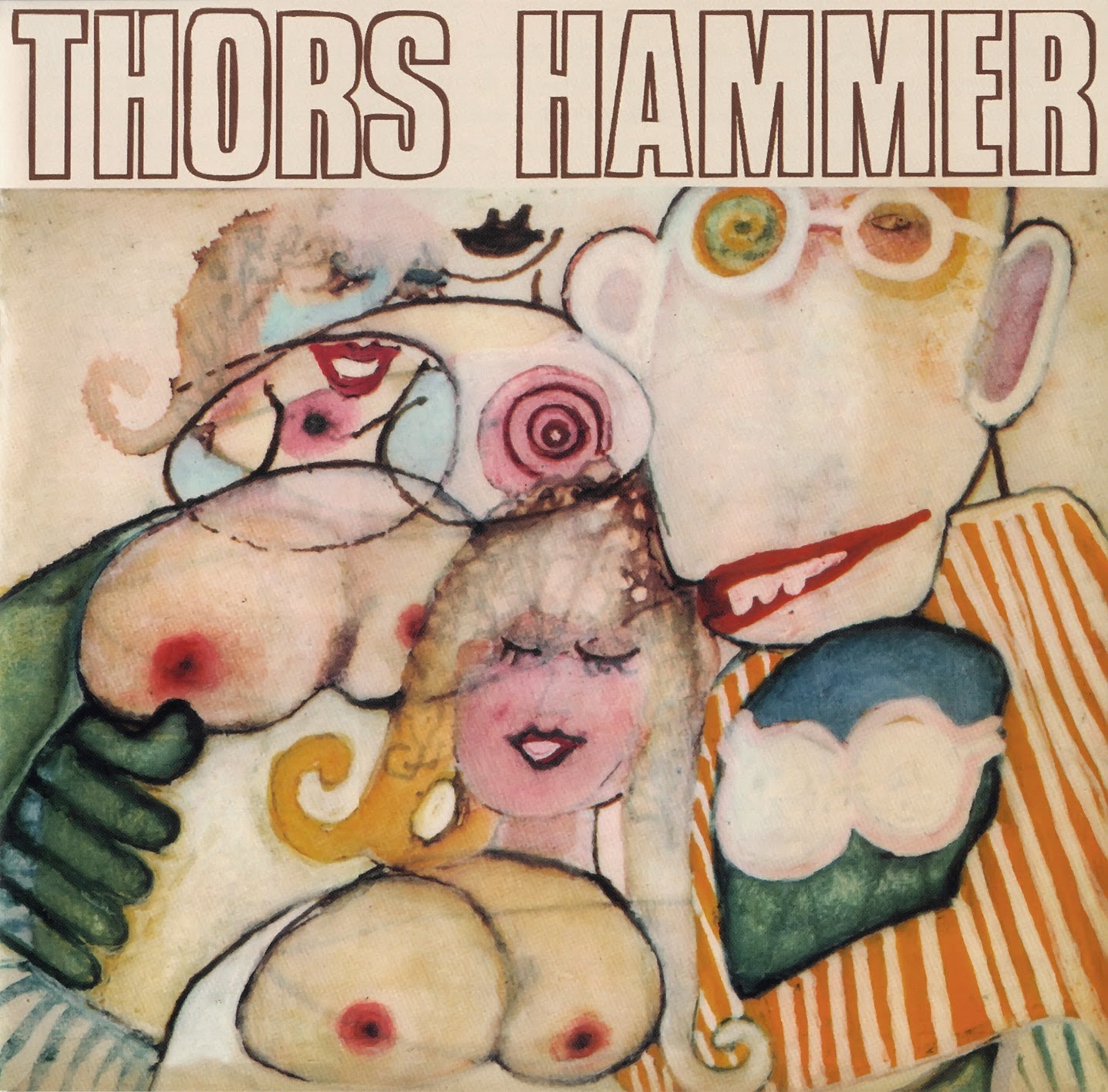 
Excellent Danish Progressive fusion, great saxaphones and hammond on this one and hard to find. They were one of those groups that promised much but never went further than an eponymous debut album. Stylistically, their music was close to Burnin' Red Ivanhoe, Blast Furnace and the jazzy style of bands like Traffic. Neehammer's sax riffing is predominant on the album's five tracks, also frequently augmented by organ and electric guitar. "Mexico" (6:21) is the most effective track (paraphrasing the well-known sax riff from Traffic's "Freedom Rider"), while the longest tracks are less purposeful (due to the slightly repetitive solo sections). 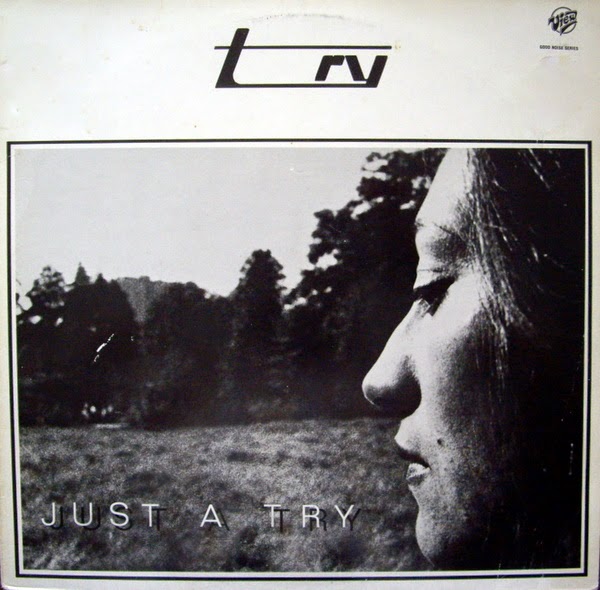 
An instrumental duo from Berlin, Try originated from the Country band Marzipan and work in numerous other projects on the local folk scene. It seems that they never existed as a proper working band, but got together to record an album as "Just a Try" and the name Try stuck. An interesting, and very obscure album, it had stylings akin to Ashra, Cluster, Rolf Trostel, Anthony Phillips: otherwise ranging from upbeat echo guitar and synthesizers onto multi-textured guitar pieces, and many other places in between.
Amadeus Reineck also worked in the duo Suedama, and worked as sound engineer at the Berlin Quasimodo jazz club. 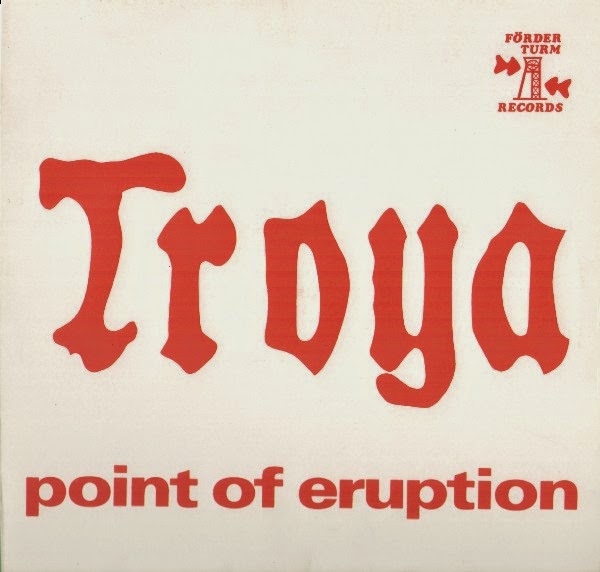 TROYA is a quite obscure symphonic krautrock inspired german band that was formed in 1972 in Werne an der Lippe by Elmar Wegmann, Klaus Pannewig, Wilhelm Weischer. The band was first called Drastic. They changed the name and the line up to record symphonic psychedelic influenced music based principally on electric guitar, mellotron and vocals. The band disbanded during the end of the 1970s.
Influenced by classical and baroque music, in 1976 they released their unique self-financed album; Point of Eruption, with very little means. The disc has a very limited number of copies. It features enchanting melancholic music with long instrumental passages, mainly guitar and organ.

Garden of Delights must be commended for unearthing this gem from the mid 70s. Amateurly produced, down to the barebones cover, but very professionally played, "Point of Eruption" is not quite a typical German symphonic release from the 70s, as a discernible celtic sensibility is grafted on to the classic Krautrock spaciness, particularly in the vocals, lyrics and melodies of "She", "Battle Rock" and "Festival".

Organ and mellotron dominate the proceedings but Elmar Wegmann's guitars provide balance not to mention some good raw solos. Passages alternate agreeably between the atmospheric and the bombastic, sometimes bringing to mind Novalis' "Banished Bridge".

All the tracks not specifically named are instrumental and of high quality, but I feel the vocal tracks, warts and all, really give this band a distinctive quality and warrant a higher rating for the disk than the recording alone could justify. Recommended to lovers of refined melodic keyboard oriented prog, who don't have hangups about production! 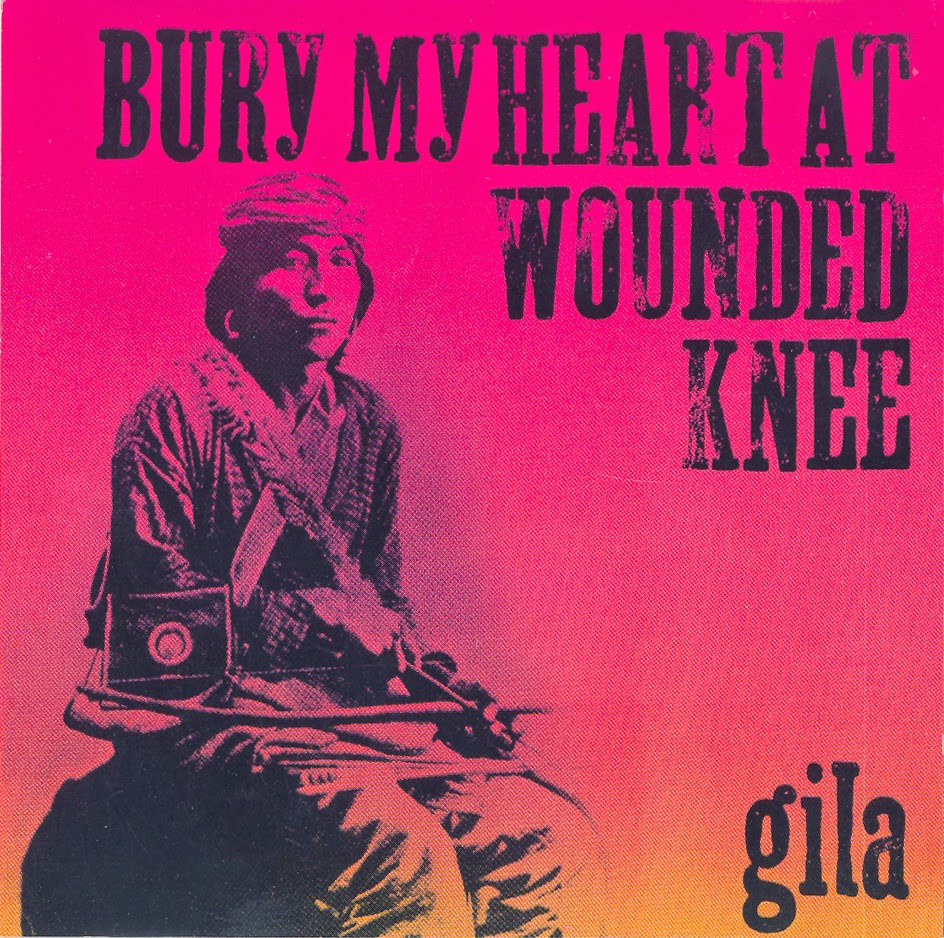 
Band members of Gila's first line-up lived together in a flat-sharing community which was the case as well with some other Krautrock bands like AD making it much easier for them to communicate with each other. In 1972 Conny Veit decided to work closer together with Popol Vuh based in Munich and therefore Gila 1 broke apart. Making two albums with them in 1972/73 he found as well Florian Fricke there and multi-instrumentalist Daniel Fichelscher of AD II to form a new reincarnation of the band. His girl-friend Sabine Merbach on vocals completed the line-up and inspired by the book written by Dee Brown they recorded this album here. The new sound of Gila was very much in the Popol Vuh vein with ethnic touches packed in complex textures featuring several guitars. In fact "Bury My Heart." could be almost considered a PV album, except that Conny Veits's compositions replaced Florian Fricke's. It's quite obvious that as the book it was dealing with the decimation and oppression of the North American Indians by the European immigrants, exemplified by one of the last and worst massacres in the year of 1868. In his own words according to the CD booklet Conny Veit "was moved by the simplicity and poetic power of the American Indian lyrics which had been included in the Dee Brown's book and I decided to set them to music anew because in my view the original American Indian music definitely didn't come up to the quality of these texts". Unlike with their debut which had been more or less without any lyrics they had to use here tight arrangements mixing them with improvised parts, a procedure that resembled that of Indian ragas. With classically trained keyboardist Florian Fricke (he visited a conservatory being a disciple of Hindemith) Veit found the perfect supplement for his own talents and as well Fichelscher's high skills on drums and bass and Sabine Merbach with her pleasant vocals contributed a lot to this excellent outcome. The seven beautiful tracks of this album are dominated by a folksy and more acoustic mood mainly created by the use of 12-string guitar and grand piano with some occasional flute. Combined with the highly poetic lyrics these intense soundscapes generate a merely haunting atmosphere. Two of the tracks, "Young Coyote" and "Little Smoke" are all instrumental and presented by Conny Veit solo on guitar. Highlight is certainly the more dramatic piece "The Buffalo Are Coming" with great percussion but all the tracks are actually excellent 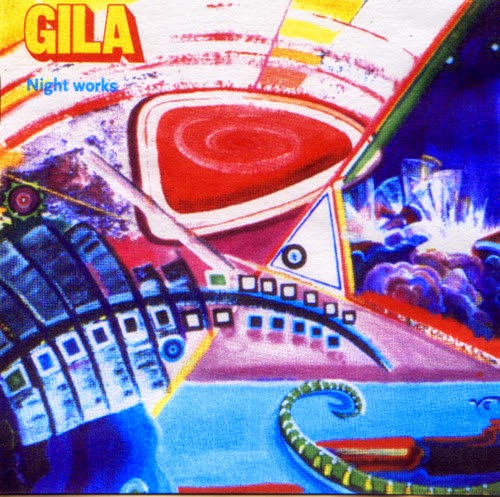 Although this album was never officially released at the time, this should be the second Gila album and even if only played as a radio broadcast, all of the tracks were brand new and not available on their other two albums. We can thank once again the great label Garden Of Delights for releasing officially this great album out to the public. Unfortunately this is not a studio album, so the sound is not perfect, but it is rather good given the conditions and the complicated story of the tapes.

This album is a real gem if you enjoy psych/prog rock and confirms Gila's reputation as the German Pink Floyd (much more than Eloy will ever be), but by Floyd, one should understand the pre-DSOTM period. Yes we are dealing with mid-tempo tracks allowing for great mood swing and many semi-improvised instrumental interplay while the lyrics are generally open enough to allow flexibility. Most of the tracks have a feeling as if they were the extended versions of Floyd's More soundtrack and you could easily glide through the skies with a doobie at your disposal.

After this record, Veit will form Popol Vuh , but will come back with Fichelscher and Florian Fricke to record the following concept album Wounded Knee about the organized massacre of Amerindians. In the mean time this posthumous release is fo be seen as a full-fledged Gila album and right on par with the historical two albums. A must for psycheads and Krautheads. 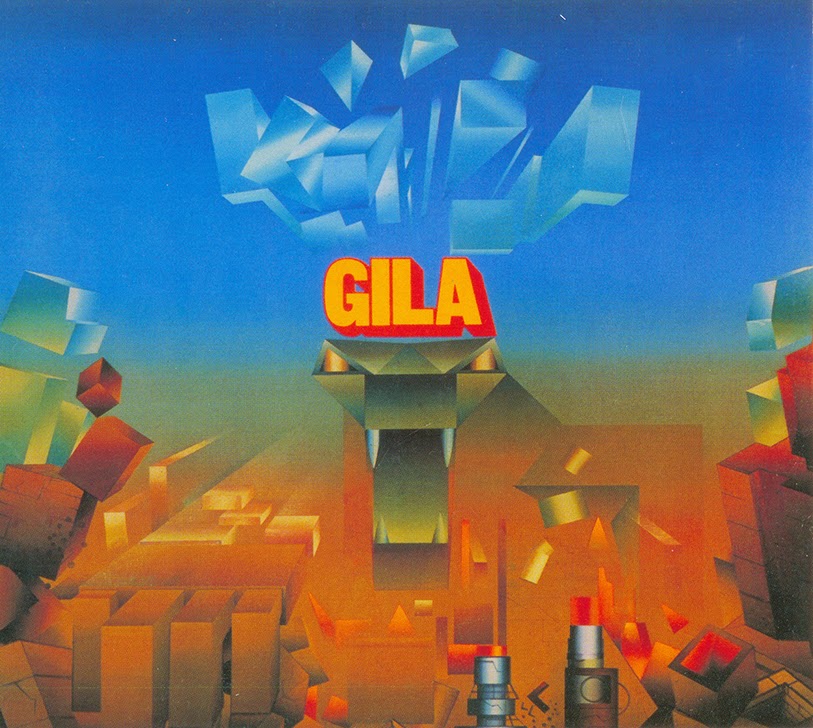 
This band was from Stuttgart and managed just two studio albums before splitting. Their guitarist leader Conny Veit will be known latter as collaborator of both POPOL VUH and GURU GURU, but this is another story.

Their first highly ambitious album - and one of the more important albums to come out of Western Germany - had a very odd concept to reflect the group's progression from aggression to communication. Quite a bloody program and I can assure you that they succeed quite well. The music on their debut runs continuously through the tracks is very trippy and atmospheric but not space rock either, In that regard , one thinks of PINK FLOYD. Their second album is very different and depicts the last and worst Indian massacre (native Americans) back in the early 70's.. The live album is posthumous but worthy of them.

In spite of their short discography, GILA is a very important group in the history of Krautrock and highly recommended to anyone looking for adventurous music.

Here's a long time krautrock classic. Gila impress us with a dynamic, intense and imaginative communication between spacey rock improvisations, lengthy psych guitar solos accompanied by luminous electric organ chords. "Agression" is a cosmic krautrock jamming, strictly instrumental (as the rest of the album), dominated by subtle and technical guitar / organ combinations. "Kollaps" is a dark and creepy instrumental piece with moody organ parts and weird, plaintive noises. "Kontact" starts with a variation of different sound collages to finally turn into an acoustic, folk guitar trip with an obvious "eastern" flavour. The track directly carries on "Kollektivitt" for a full-on guitar / organ jam with some folky, mellow accents. "Individualitat" is a strong hypnotic-tribal jam for percussions and guitar experimentations. A serious, intricate mixture between free rock, spacey-psych effects and discreet eastern influences. A must for fans of Agitation Free