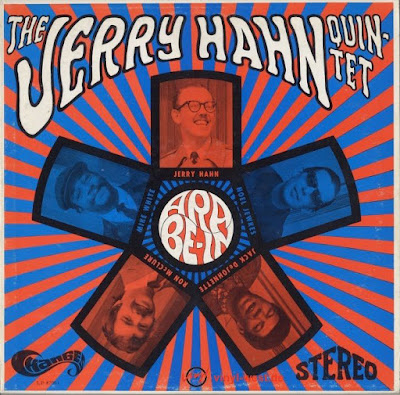 Guitarist Jerry Hahn was at the time of these recordings (1967) working with saxophonist John Handy. At the urging of Arhoolie's boss, Chris Strachwitz, Jerry Hahn assembled this all-star quintet to record some of his compositions (except "My Love" written by Noel Jewkes). Today, after years as a successful leader and side man, Jerry Hahn is teaching and living in Portland, Oregon.

Jazz critic Phil Elwood wrote the original liner notes and updates them by saying the music 'remains after three decades, free and airy ‚ as distinctive and interesting in the 1990's as it was in the 60's.' White shines on 'In the Breeze' with a hard swinging line that melds perfectly to the reed of Noel Jewkes. 'My Love' started out as just another Latin spin, but the rhythm was so subtle from Ron McClure bass and Jack DeJohnette on drums that it probelled this heady guitar work from Hahn and then built into what then was an envelope pushing Latin conclusion. 'Dippin Snuff' is a boppish airy dash with flute and guitar almost in a novelty mood and again envelope pushing. Great fun. 'Ragahanter' invokes the sitar fad of the 60's in the Bay Area with very unusual sitar sounding solo guitar against a blues mood. 'Ara-Be-In' is the Arabic version with the Jewkes tenor pushing edges in lyrical fashion, big bass rumbling below, light tabla tapping like drums and then a building quartet fervor. Extremely interesting reissue will surprise you.

Review from The Heights (Number 8, November 1967)
A case in point is the recently released album Ara-Be-In (Arhoolie—Changes Records 7001) by the Jerry Hahn Quintet. Jerry Hahn is a guitar player who is best known for his work with jazz musician John Handy. The other members of his group are Mike White, a violinist who was with Hahn in Handy's group of a year and a half ago, Ron McClure and Jack Dc Johnette, bassman and drummer respectively for Charles Lloyd, and Noel Jewkes, a San Francisco jazz musician (tenor and flute) who sounds very much like Charles Lloyd. In other words, Hahn's group is basically a West Coast jazz group. Their album, however, contains two tracks ("Ara-Be-In" and "Ragahantar") which are as much like the highly inventive rock of the Grateful Dead and the Cream, for example, as they are like jazz. "Ragahantar" is Hahn solo. It is formally based on the raga but it is as close to Indian classical music as most Indian derived rock is; i.e., not very close. It is its own thing, just like Country Joe's instrumentals and the Doors' "The End" are unique though influenced by Eastern tonalities. Hahn's guitar is in an open tuning (reminiscent of Sandy Bull) and several strings act as sympathetic strings, setting up a

drone or root nole over which Hahn solos. "Ara-Be-In" is more interesting if only for the fact that the rest of the quintet is included on this track. The same guitar figure opens "Ara-Be-In" and the structure of the piece is the same for each soloist—a rhythm-free improvisation in which the rest of the band establishes and augments the drone followed by a quick tempoed rhythmic improvisation once more over the drone. White's violin solo is the most effective because his instrument (like the guitar) is most readily adaptable to this style of music. The piece ends with a unison improvisation and finally a return to the theme. "Ara-Be-In" is impressive from any musical point of view, but it is especially interesting in that Hahn's group is clearly thinking along the same lines as, for example, Jerry Garcia's group. As the instrumental quality of rock keeps improving, we feel that the music will end up in the area that Jerry Hahn's music encompasses — a musical area that defies labels because it is eclectic and is unashamed of its roots. Some rock groups — the Grateful Dead, Country Joe and the Fish — are already there. Whether or not they will be listened to is another question. THIS IS THE END.
Posted by Unknown at 10:28:00 PM