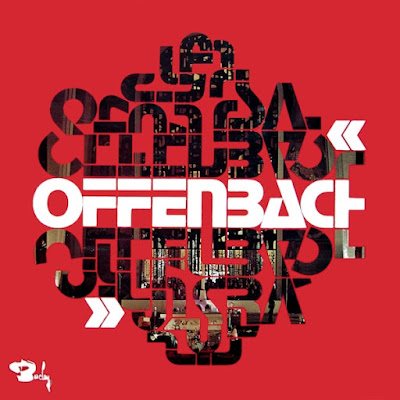 
Despite having released their debut album, called Offenbach Soap Opera, it didn't create any momentum; the band shortened its name to Offenbach. Through a series of event, the group finally got their break and received the OK for doing a rendition of La Messe Des Morts in their own terms in the Basilique De Montreal and later in other prestigious places in front of big crowds and rave reviews, which eventually lead them over to France via Falaldo's project. This was the group's big break and I understand that the show/concert was filmed as well, and broadcasted live by Montreal radio legend CHOM FM. The resulting album was released soon after, but only chosen parts of the mass were on the vinyl, for time restriction reasons. The ProgQuebec reissue not only reinstates all of the missing parts of the mass (including the non-musical bits), but adds the few unrelated non- mass tracks that were played as encores.
Named after a dubious play on words about Synchronization, Saint-Chrone De Neant is a rock mass, a bit like the Electric Prunes recorded back in 68 and Os Mundi will do the following year (73) in Berlin. The album was recorded live, Nov 30 in front of 3000 spectators inside the Basilique and another 2000 that couldn't get inside and were probably freezing their nuts off. (This writer would land a three months later in Montreal for his North Americans adventures). Those reading me for a while know that although fiercely atheist with a slight pagan side for provocation purposes, you should think that I would hate such a concept, bit from the EP, OM or Offenbach. Well guess again, the churches allowed many liberties during and outside the mass throughout that magic 70's decade. Don't get me wrong here: I'm not a huge fan either of such projects (that included a large choir in this case and the church organ), but it makes for pleasant listen if taken lightly and the group is talented enough to carry it out with credibility. Despite this project being Harel's baby, Gerry boulet and guitarist Gravel contribute quite a bit to the compositions

One of the reasons behind this successful but risky concept is that the Baslique's excellent aural capacities were used to full effect (the drums sound is absolutely perfect), and after a 5-mins Chaconne (from Couperin) played on the church organ by group buddy Asselin, the group launches slowly in an 11-mins Pax Vobiscum with a lengthy Hammond intro, slowly segueing to choirs under the demented drum rolls of Belval and ending in a cheesy church theme, aimed at softening the heart and the wallet's leather of the Christians fidels. The payers and religious monologue are not the most entertaining, but they're short enough, in three languages (Latin, French and English) and are always good for a laugh, or at least a chuckle. The mass goes on with many instrumental passages that allow for solos and individual bravura moments and many joys, much more than the few cringing more religious moments, making me wonder if and how much the clergy agreed. Fils De Lumière has an Ange dramatic and sonic quality with a tad of Sabbath in the guitar/bass/drum ending. After the "normal" mass, the group was called back for an encore and played Peanut (from the Bulldozer project) and the crowd requesting more, Rirolarma (pun intended >> laughing to tears) and J'me Pousse were performed, the latter despite a failing PA system, as you'll hear,

This "amazing" album gave Offenbach a push for an international career that very few Quebecois rock group would have (not speaking of singer/songwriter or divas, here) and they would head for Europe for the next two years, not even waiting for Bulldozer to finally gets its release. The group will play on until the mid-80's; which unique in Quebecois prog groups, although by then, there wasn't much prog left in the sound. This reissue will probably solve many Christian progheads about their Sunday morning choice of music. They might want to alternate it with Os Mundi and Electric prunes. Certainly worth throwing an, ear on it, but I'm sure this will be close to an essential piece on your shelves? it certainly is in regards to Quebec's prog boom.