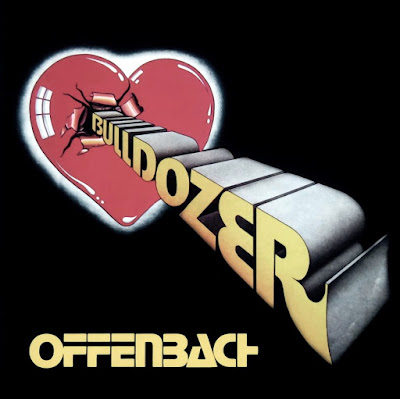 
Although their third release, this album can be considered their debut album/ indeed they started the music for the Bulldozer film soundtrack in 71, before their first album (Offenbach Soap opera) was released, but the project got into a tangled mess and when it was finally settled, the group had released two albums. So the group was touring France when the Film was finally ready for its opening upon Valentine's day in 74, the album being released the same day. It didn't really get promoted, because only singer/pianist Harel had made the trip (for budget reasons) from across the Atlantic?. And he didn't rejoin the rest of the troops. So Offenbach was a double singing-keyboardist fronted group since Pierre Harel (mostly piano) joined them, his alter-ego being Gerry Boulet (organ & sax). Gerry's brother Dennis had given up the drum stool and was replaced by the frightening-looking Belval.

Opening the A-side is the movie and title track (sung version), and you'd think you're almost in a rocker Spaghetti-Western with Moricone writing on acid. The organ-dominated track feature choirs, underlining Harel's distinctive Joual-French vocals. A good start, even if the overall sound is not the greatest. Hey Boss is a great double piano piece with the same background choirs and is a small tour-de-force in itself. Magie Rouge is a great instrumental, sometimes reminiscent of the Yardbirds line-up of Renaissance, but with a great guitarist. The piano provides a solemn touch that Gravel's guitar rips iconoclastically to shreds. Great stuff. Next is a remake of Caline de Blues, their first hit in Quebec, and it overstays its welcome. The Peanut track and its Tabarnac intro is another example of how deadly the group was. Bataille starts shakily (difficult pick up-point from the film's soundtrack, I guess) with Boulet wailing on sax, but it doesn't go anywhere.

The same movie theme opens the flipside of its soundtrack, but this time it is the instrumental version without choirs or scats, but sax dubbing, followed by a fast drum solo and later in SOS, the group clams down to a mid-tempo guitar/piano fronted piece over Mouffe (the actress from the film) scats and sings. Harel comes back, overpowering the group with his over-done vocals in Comme On S'Ennuie. Faut que J'me Pousse is another Harel treack where he overpowers the group, but then again it was his film?. Whether this was on the film or not, the closing Adios Amor, subtitled Famille Savard is an awful- sounding and cheesy tune that is sticking out from an uneven album. There are two bonus tracks at the end, both alternate takes from the original soundtrack, but they're not really adding much to the album's overall value, except that it won't close on the dreaded Adios track anymore.

I suppose that seeing the movie would actually help understanding the album, even if the most brilliant moments have no need of picture. I doubt that this is the kind of movie you'll find easily, and certainly not easier than the other Offenbach film that Faraldo was realizing around the band in its French tour. It would be nice if both could one day be committed onto one DVD.