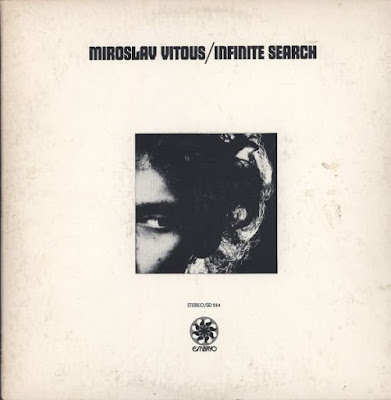 
Miroslav Ladislav Vitous (6 December 1947), is a Czech jazz bassist who was born in Prague. He begun play violin at age of six, started playing the piano at age ten, and bass at fourteen. He studied music at the Prague Conservatory subsequently winning an international music contest in Vienna, earning him a scholarship to the Berklee College of Music in Boston. One of his early music groups was the Junior Trio with his brother Alan on drums and young another future-great Czech fusion musicianJan Hammer on keyboards.

A year later after he came to Boston, in 1966, Miroslav moved to New York & collaborated with musicians such as Bob Brookmeyer, Chick Corea, Miles Davis, Art Farmer, Stan Getz, Charlie Mariano, and Herbie Mann. In 1970, the group WEATHER REPORT was formed along with Wayne Shorter and Joe Zawinul. After three years left the group due to musical differences. After brief break he formed Miroslav Vitous Group with John Surman, Kenny Kirkland and Jon Christensen, and recorded 3 albums for ECM. After 3 years group was disbanded.

Vitous has become a director of Jazz Department in New England Conservatory in Boston, and leads the department for 3 years. He reunited with Chick Corea and Roy Haynes (Trio Music): it was a very successful period for the trio for the following 2 and half years. Tours all over the world and 2 albums recorded for ECM is the outcome of this reunion.

After this time he made a very successful duet world wide tour with Stanley Clarke.

Makes several performances as a soloist with Pittsburg Symphony Orchestra and Music of Viva of Boston.

He recorded also a solo album for ECM ("Emergence").

In 1988 he moved back to Europe. Stopped teaching completely and became full time composer/performer, once again.

He made a lot of different projects with his band or solo, appeared at many festivals and concerts and participated in other projects with different top European musicians. After 22 years he returned to Prague and recorded an album with his brother Alan Vitous.

In March 1989 he started playing solo concerts. He wrote and performed concerts for Orchestra and solo bass in Frieburg (Germany) and Italy. Prior to the release of 'Universal Syncopations', he took a seven year break from performing to concentrate his efforts at making orchestral sample libraries. He was in search of electronic sounds to assist him in composing, but discovered what was available in the marketplace to be lacking in quality. As a result, Miroslav became consumed in producing the symphonic samples that he had been searching for, by sampling each solo player amongst an orchestra. "Sampling is an extremely expensive process, but allows me to compose more easily when ideas are fresh in my mind."

The result of being able to compose with the electronic samples, brought about the release of the album 'Universal Syncopations'. Miroslav knew beyond a doubt that Jack DeJohnette would be his drummer, since Jack was his favorite drummer for several decades and had participate in many collaborations. John McLaughlin was chosen for the work that he had done with Miles Davis in the seventies, and Miroslav wanted to tap into that evolutionary style and to take it up a notch. Chick Corea has asked for Miroslav's help on many of his previous albums, so this time it was Corea who was asked to collaborate. Jan Garbarek is Miroslav's favorite sax player, and they have an intuitive musical connection. This particular work captures the creative force in the sounds and motifs, and justaposes jazz and classical styles in a very open and free way.

Miroslav Vitous is probably most known for being part of WEATHER REPORT when they first started out, but he has a long resume. This is his first solo album released before WEATHER REPORT's debut which came out the following year. Miroslav is such a talented bass player but he also plays violin and keyboards, and when he was younger he was a world class free- style swimmer. In fact after winning a scholarship to Berklee College of Music he had to decide between swimming and music. Thankfully he chose the latter. The lineup on this album is such that you should be sitting down when you read off the names. John McLaughlin on guitar, Jack DeJohnette on drums, Joe Henderson on sax and Herbie Hancock on electric piano. Told you so. My first impression of this album was that it wasn't very dynamic. It's more Free-Jazz perhaps, certainly not in the MAHAVISHNU ORCHESTRA style. And Vitous is very dominant here along with DeJohnette as the guitar, piano and sax come and go.
"Freedom Jazz Dance" opens with seemingly everyone being part of the sound. Very intricate stuff. Piano comes to the fore 3 minutes in. Bass is just throbbing away then the guitar takes the spotlight after 4 1/2 minutes. McLaughlin is ripping it up. Henderson's turn after 6 1/2 minutes. This is the most dynamic track. "Mountain In The Clouds" is a short tune with cymbals and bass leading early. Check out the bass and drums !

"When Face Gets Pale" opens with cymbals, bass, piano and intricate guitar. The bass is incredible here. Deep bass lines late. "Infinite Search" is led by bass, piano and drums. "I Will Tell Him On You" features sax, piano, bass and drums standing out early. Sax leads before 3 minutes. It gets pretty intense a minute later. Guitar takes the lead then piano 7 minutes in. Drums pound away after 8 1/2 minutes. "Epilogue" is the only track that DeJohnette isn't on, instead we get Joe Chambers. This one's fairly laid back as bass leads the way. Piano becomes more prominant 4 1/2 minutes in.

For me this is one of those albums you really have to pay attention to. It's not background music, you have to give attention to the detail.