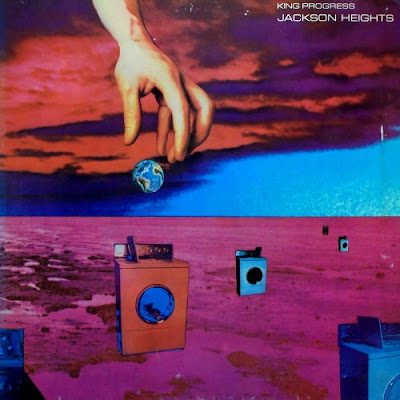 There are a few misconceptions about the group Jackson Heights, the first of which was that it was mostly Lee Jackson's group (true at first, but hardly the case later on) and that the disappearance and split of THE NICE had been an acrimonious one. Indeed, Keith Emerson regularly dropped buy gigs to cheer on the mainly acoustic trio, and Emerson and main songwriter Brian Chatton had many family-related contacts. So when the famed trio did split, Lee dropped the bass guitar and picked his acoustic guitar and started writer songs in the singer/songwriter mode. So bassist Lee Jackson left and although he was warned about his vocal limitations, his ego got the better of him (in this regard, Emerson was not dephased when he hooked up with Greg Lake in ELP) and he chose to become lead singer of a quartet that consisted of old buddies Harcourt (guitars, kb), Tommy Slone (drums, perc) and Mario Tafia (bs, guits). Named after a NYC district, the group's debut album King Progress got a release on the Charisma label (The Nice's old label), but it didn't dent the charts despite its very poppish nature. Indeed, the songs were sometimes short pop tunes like some of those early The Nice tune, and there is even a rework of Cry Of Eugene on this album.

But the group was already falling apart and Lee Jackson had to rebuild it from scratch, this time much sturdier including songwriters Brian Chatton (ex-Flaming Youth where he played with Phil Collins) and John McBurnie, thus adopting the acoustic trio mentioned in the first paragraph. For the three albums they will make, ex-Crimson man Mike Giles will play drums when asked to, but will never tour with the band, as they were very much a sort of British CS&N on most songs, while some of the group's longer tracks still maintained a high musicianship. Both Fifth Avenue Bus and Raggamuffin's Fool have pleasant but unexceptional songs; none to bring enough attention for the group to develop a loyal following outside the Uni circuit. The group tried with their last album an ill-fated concept album about bands and groupies (a dimension Lee Jackson was always very aware of) called Bump & Grind, which would prove catastrophic (both in sales and arts) and the group wouldn't survive the album very long, especially knowing that Jackson was working on his private funds into JH.

Lee Jackson had been contacted by Swiss Wizz Patrick Moraz (ex-Mainhorse) to form a band, because he had the finances and recording (Charisma) deals ready, so both contacted Brian Blinky Davison and soon Refugee was born. Alas not for long as Yes would lure away Moraz Past this point, Jackson dropped out of the music scene altogether for over two decades and concentrated on a designer/drawer career, which to this writer's knowledge didn't develop beyond the confidential level. In the late 90's, the trio reconvened and played a bunch of concerts, but no records came out to celebrate this.. Although largely forgotten about nowadays and greatly ignored back in those days, JH did manage to release four albums, which is more than many bands can say.