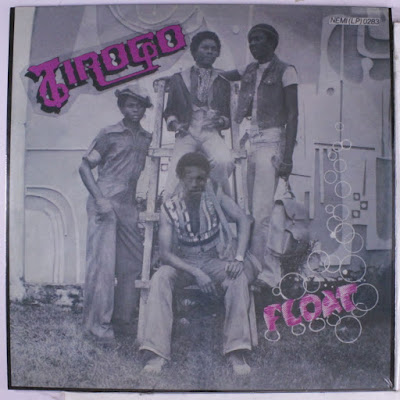 Originally released in Nigeria, 1977. "Tirogo is another great sample of lost African psychedelic music. It was recorded in Nigeria in 1977 and originally released on EMI, same as the great album BLO - Chapter One. This Nigerian rock-psych band Tirogo is similar to bands such as Ofege, BLO, Founders 15, Doves, and Aktion. Great African songs covered with wild guitar solos, spooky organ, great beats and strong vocals. 4 guys on the cover / 6 were actually in the band looking pretty young. It is getting harder and harder to find lost African bands since there is a big rave in the International music scene to hunt for good material. With the massive help of collectors and Now Again Records in the USA, who actually went to Nigeria to sign the boys, we are able to present this amazing album to you. It will suit the same music lovers who like Amanaz, The Witch, Question Mark and BLO."

Tirogo were labelmates with the band Blo, and ought to appeal to folks into Blo, Ofege, Sjob, and others from the Nigerian scene, as well as "Zam Rockers" like Witch, Amanaz, and the Ngozi Family from down in Zambia. Originally released in 1977, Tirogo's Float, their debut, is a stoned masterpiece of psychedelic garage groove with authentic African vibes. Seriously, at this point, can't we just say, if you like those others, you'll like this? 'Cause you will. Stinging fuzz guitar leads swirl and sizzle over seriously funky, energetic rhythms, as the vocalists chant about girls and the devil... yeah! The sort of thing that when you're listening to it, you can't help but think, "this is the best shit ever!"... and it's kinda true!!
Dunno how many more records like this they can dig up, it's hard to imagine, but we're grateful for what's been reissued thus far, winners like Tirogo and Witch, wow. And they do it right, the cd booklet includes an extensive, interesting interview with original Tirogo lead vocalist and bassist Wilfred Ekanem, conducted by African music collector and Now-Again head honcho Egon, who coordinated these reissues.
Posted by Unknown at 10:58:00 PM