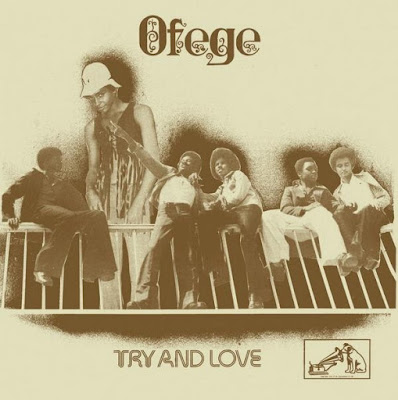 
Recorded while the band members were still in high school (average age of 16), Ofege’s debut album Try And Love was originally recorded and released in 1973. Due to their vibrant combo of sweet harmonies, hooks & fuzz, they would become one of the most legendary Nigerian groups of all time, with expressive sales and national stardom.

However, with only four albums released until 1978 and no recognition outside Nigeria, Ofege’s short career would only be rediscovered with the turn of the century.


"Try and Love" is a very intriguing Nigerian psychedelic album. The music sounds as if it's from an earlier era - say around 1968 - and perhaps more like a US band than UK (the influence you might expect from Nigeria). The songs themselves have a light and breezy song style, complete with a Vox Continental sounding organ, and very distinctive African English vocals. So at this point they sound like some sort of African Afterglow (the Oregon psych band). But what makes this album so good is the delicious fuzz guitar leads, cranked at maximum volume, and played in a soulful manner. Well worth checking out