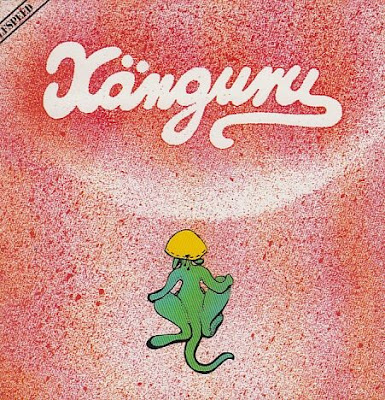 This group from experienced musicians, hailing from Hamburg, was brn out of the ashes of another Jazz/Fusion act, To Be.When guitarist Peter Weihe dissolved To Be in 1980, he had the chance to meet again with his former bandmate and keyboardist Claus-Robert Kruse.The two musicians gave birth to Kangueru, surrounded by drummer Olav Gustafsson and bassist Anselm Kluge.They recorded their debut in their hometown, at the Try Harder Studio, with Herb Geller as a guest on sax and flutes, a musician formerly known for working with Brave New World, Lucifer's Friend and Satin Whale.The self-titled debut was released in 1981 on the obscure Pingo label, re-released a year later on Marifon.

This group played typical, 80's Jazz/Fusion akin to SURGERY and SYNCRISIS, minus the strong Kraut influences, while you should add a fair dose of funky elements in their all instrumental proposal.Pleasant music with pretty solid guitar work, including bluesy and Rock'n'Roll stylings between the furious grooves and the jazzy solos, and some fantastic keyboard work, performed mainly on synthesizers.The atmosphere goes from Lounge atmospheres to smoky, guitar-led Fusion with a decent synth background, featuring nice breaks and a consistent rhythm section, while Geller provides a nice depth with his careful sax and flute parts.All tracks obtain a happy feeling due to the playful, naughty guitar and piano tunes, expect a couple of them to sound as standard 80's products with a cheap production and a rather bland, radio-friendly approach.But there are also a couple of killer cuts in here, like the balanced opener ''You're not my sacred cow'', which soon escapes from the funky intro to offer a synth-based Fusion with nice sax and guitar as supporting instruments, while ''Ein schoenes haus im gruenen'' contains some of the best guitar hooks and solos in a Latin style, performed by the very talented Peter Weihe.

Breezy and dreamy Jazz/Fusion for all fans of delightful, instrumental music.Avoid if you search for complex arrangements or extreme solos, this one is based on tight plays and melodic structures for all lovers of good music.
Posted by Unknown at 9:37:00 AM