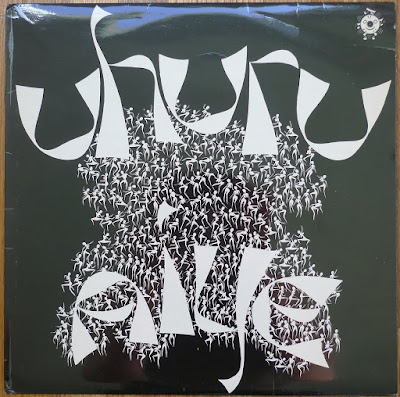 Occupying a location somewhere near the intersection of Afrobeat, Juju and garage rock, the album Uhuru Aiye by Bob Ohiri and his Uhuru Sounds (Ashiko Records AR 001, ca. 1976) is often rumored but seldom heard. A track from it appears on the new collection Nigeria Afrobeat Special (Soundway SNWCD021), so it's worth taking a closer look.

Bob Ohiri was a guitarist with Sunny Adé's African Beats and is said to have briefly played with Fela's Africa '70, although I can't confirm that. The "Uhuru Sounds" were apparently a one-off - basically just some guys jamming in the recording studio. The only members credited on the sleeve are "Prince," "Bob" and "Shegun."

So what to make of the music? Uhuru Aiye is truly an odd and idiosyncratic amalgam - like no "World Music™" or "Afrobeat" or "Afrofunk" you've ever heard. It doesn't always succeed, but when it does it works very well.
Posted by Unknown at 1:48:00 PM