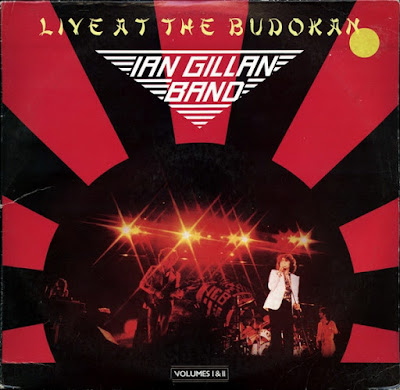 
Wouldn't you have guessed it?? After returning to a Purple song format in Scarabus, that Ian Gillan and his band would go on to return to live "old glory" moments in the Budokan theatre in Tokyo, where the Japanese crowds are sooooo easy to please and way over-appreciative. Recorded after the band's Scarabus album, I suspect this was probably among the last gig of the IGB well that band with that line-up)
Opening on the excellent title track of the second and best album CAT, the IGB take their time building up, thus almost doubling its length, something they will do for Money Lender (from the same album) as well and to a lesser extent Over The Hill (also from CAT), while . Oddly enough, the band chooses to alternate tracks from Clear Air Turbulence and Scarabus and give us three from each, but as you can easily guess, the CAT tracks win easily with their infectious grooves and enthralling solos, compared to the sterile tightness of Scarabus tracks. Of course, what sucks here is that Gillan lives on Purple glory and more or less two thirds of the second album is devoted to Purple tracks, including the obligatory (but atrocious) Woman From Tokyo.

Well although I find this album a bit of a shame, living on a certain past, it does have some moments, particularly when bordering on the jazz-rock passages and the fact that the band was probably better live than in the studio, I could be tempted into saying that this Live at Budokan is all you need from the IGB, but Clear Air Turbulence might be worth a second look.
Posted by Unknown at 12:46:00 AM