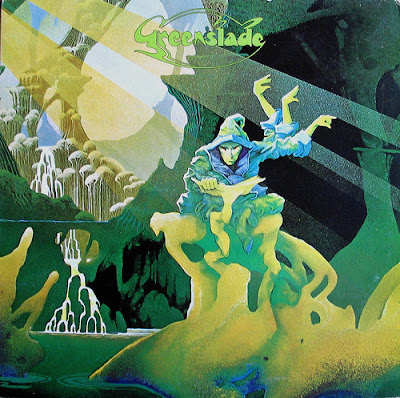 
Greenslade has always been a great unsung prog hero from the UK. I fell in love with their style at first listen, which happened the day that I purchased their first two albums. I felt connected with the dual keyboard interplay, the jazz/blues nuances that were fluidly instilled in their symphonic approach, the powerful rhythm section, the way that all the virtuoso playing was accurately placed in the logic of the compositions, and even Lawson's peculiar singing. 'Feathered Friends' kicks off the album with an effective, fast-paced motif, which softly turns down and gives way to the slower, blues- based sung motif that fills 90 % of the song: this is an appropriate opening number, since it shows straight away the typical keyboard interplays fluidly sustained between both Daves, the solid rhythm partnership of McCulloch and Reeves, and Lawson's sharp vocal. 'An English Western' is an effective instrumental pretty much focused on Greenslade's organ excursions, with Lawson and himself delivering some well crafted complementing labour on grand and electric pianos: the bluesy aspect is somewhat pronounced on this one. That same bluesy aspect is evident in 'Drowning Man' (one of the most popular Greenslade tracks, well, under the boundaries of the popularity they managed to achieve), but it goes more places, from jazz to R'n'B to symphonic prog all throughout its developing themes. 'Temple Song' is a candid semi-ballad based on a Far East-like motif: beautiful dialogues between vibes and electric piano, and the first time Lawson chooses to assume a gentle vocal cadence in order to deliver a more "conventionally pleasant" singing. 'Mélange' is another Greenslade classic, going for the rockier side of things while being supported on a jazz fusion basis. Reeves shines particularly here, with his fuzz bass assuming the leading role in many passages: McCulloch delivers a more compact drumming in order to compensate for his rhythm partner's melodic excursions. Were it not for the closing track, this one would be my personal fave in this album. Without the presence of a guitar, it's amazing how Greenslade can get really aggressive whenever they want to: the organ chord progressions and the dual mellotron layers of 'What are You Doin' to Me' feel really dense and heavy, and the way that Lawson delivers his sung demands as stated in his lyrics don't make things any softer. Generally speaking, I feel this number as an appropriate moment of energy and irony between the exhibitions of instrumental tour- de-force delivered in the preceding and following numbers. So now, here it comes, last but not least, the closure 'Sundance'. The epic multicolored explorations and immaculately cohesive interplaying contained in this 8 ¾ minute long piece make it the most impressive number in the album, and a most amazing closure as well: it has all the common recurrent elements in the quartet's style, albeit with an overtly featured symphonic feel. If this is the first Greenslade experience for the listener, 'Sundance' sure makes them willing to keep track on this band's efforts - they won't be disappointed by the follow-up "Bedside Manners are Extra", but that's an issue for another review. As for "Greenslade", I think it's an excellent sample of prog stuff with a jazz-blues twist, and it would make a great addition for any good prog collection.
Posted by Unknown at 8:06:00 AM