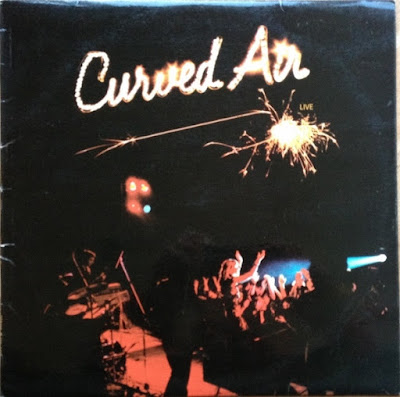 The original line-up of Curved Air, except bass player Robert Martin who was replaced by Phil Kohn, had problems with an unpaid tax bill, leading to them reforming for a three week tour of the UK, during which this album was recorded.
With all the line-up turmoils, it would be forgivable if the performances on this album were less than perfect. In fact “Live” stands as a worthy testimony to their unquestionable talents, with many fine moments.
The selections are taken from their early albums, “Air conditioning”, “Second album” and “Phantasmagoria”, with “Air cut” being ignored completely, presumably since it was recorded by an almost completely different line up. The opening tracks, “It happened today” and “Marie Antoinette” are pretty faithful to the originals, although Sonja Kristina does seem somewhat over-excited, replacing the smooth multi-tracked vocals of the latter with a far more aggressive performance.
The latter part of the album is more improvisational, with both “Propositions” and “Young mother” being enhanced by lengthy instrumental workouts. Way and Monkman both enjoy considerable freedom on these tracks to let loose with extended performances. The wonderful Darryl Way epic “Vivaldi” is taken for a nine minute romp which includes the “Sailor’s hornpipe” (per “Tubular bells”), and some extended violin virtuosity. Kristina, who would otherwise be unemployed for this piece, misguidedly decides to add some vocal improvisation, but this is more than compensated for by the synthesiser and synthesised sounds.
The closing “Everdance” finds Kristina still rather over-doing the vocal pyrotechnics, the track otherwise being a faithful recreation of the original with a brief reprise of “Vivaldi” to close.
In terms of live albums, “Curved Air” live captures the essence of the band in that environment well. The talent on show is undeniable and the chemistry they create together palpable.
The reunion was short lived though, with Francis Monkman and Florian Pilkington Miska leaving again immediately afterwards. Kohn left in 1975.