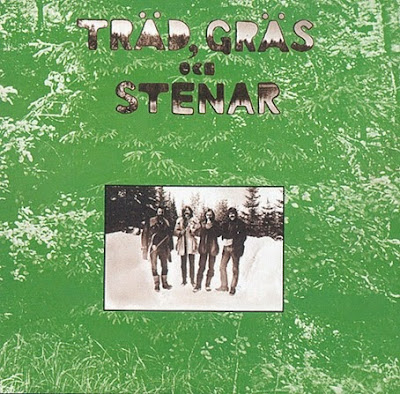 With their trance-evoking mix of psychedelic blues-rock and folk music, Träd, Gräs och Stenar (Trees, Grass and Stones) played a central roll in the development of progressive rock in Scandinavia in the early '70s. They were also one of the biggest, and best-sounding, examples of the idea that the audience should participate in the music. Träd, Gräs och Stenar was formed in 1969 by drummer Thomas Mera Gartz, bassist Torbjörn Abelli, cellist Arne Ericsson, and guitarist Bo Anders Persson, remnants of International Harvester, and released a self-titled debut album in 1970. That same year they wrote the music for the film Du Gamla du Fria but remained mainly a live band. Not only did they perform better live than on record -- they even had a program that pointed out live interaction with the audience as the main purpose.

Träd, Gräs och Stenar stood for a union of art with politics and artists with the audience. Practically, that resulted in concerts where the audience took part in the music, as can be heard on Spela Själv. This was also one of the ideas behind the illegal festivals at Gärdet that the band initiated. Guitarist Jakob Sjöholm joined in 1970 and the first few years of the decade came to be very productive for Träd, Gräs och Stenar. They toured throughout Scandinavia, took part in various festivals, events, and protests, and released the live LPs Djungelns Lag and Mors Mors in 1971 and 1972, both having grave sound problems. The studio album Rock För Kropp Och Själ, with its 20-minute title track, was released in 1972. Feeling dwindling support for their idea of organic art anarchism and reportedly also having problems with the police because of the amount of drugs at their concerts, they decided to disband later the same year.

In 1979 Träd, Gräs och Stenar reunited, now including poet Thomas Tidholm, who had been a member of International Harvester in the '60s, and during 1980 and 1981 they toured under the name T Gås. If this reunion wasn't too successful and progressive rock was looked down upon in the '80s, the '90s saw Träd, Gräs och Stenar's influence being recognized again, with names like Pavement's Stephen Malkmus mentioning them as an inspirational source. In 1995 it was time for a more lasting reunion and in 1996 they played at the Emmaboda Festival, which was followed up by a number of festival gigs in the coming years. In 2000 and 2001 they recorded material for a new studio album, the first in almost 20 years; Ajn Schvajn Draj was released in 2002. The group resumed touring during subsequent years, but guitarist Persson would later depart the touring version of the band. Träd, Gräs och Stenar issued another album, Homeless Cats, in 2009; however, bassist Abelli passed away the following year, and drummer Gartz died in 2012.