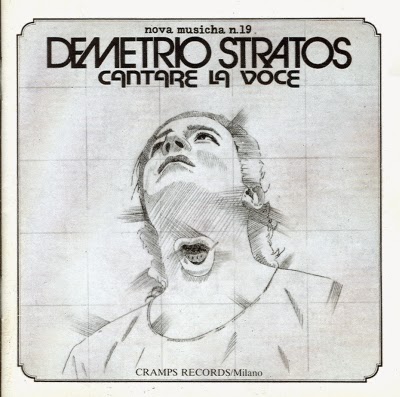 One to annoy the neighbours with. Stratos uses his voice as an instrument, as the cliche goes, with hardly any conventional singing; he uses various unusual effects, some of them very striking. I can think of a few women who've used their voice in a similar way (Ami Yoshida, Joan La Barbara and Meredith Monk come to mind), but no other men; not sure why this should be, not sure it's at all significant, might just be my own ignorance, but there it is.

For the most part, these vocals are presented barely, without a conventional musical backdrop, and without any particularly obvious attempt to make them into pieces of music with a shape. They're just held up as examples of this technique or that, studies in what the voice can do. The effect is like a catalogue or a sample book rather than a novel. Only on the last couple of tracks are overdubs employed to create something more layered, more normally musical (the earlier stuff prepares the ground for this development, I suppose). You might find this entirely unsatisfying, or you might find the concentration on the vocal technique to be fascinating (I'm in the latter camp). The difference between the earlier, balder tracks and the later, more developed ones is perhaps comparable to the difference between an early Steve Reich work like "Come Out" and a later one like "The Desert Music".