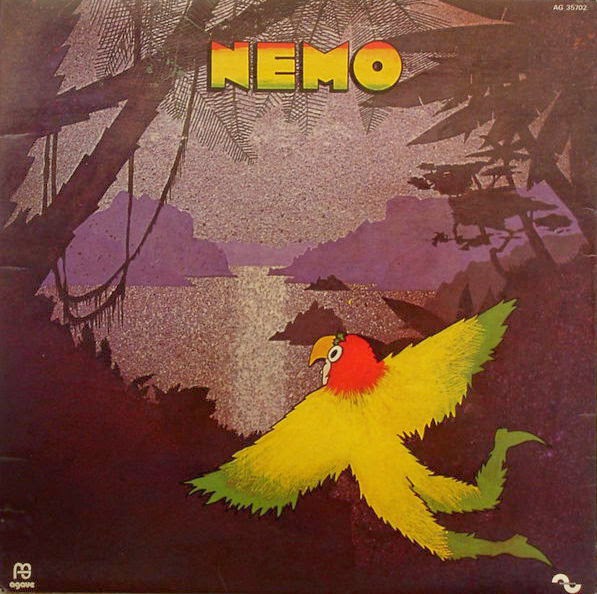 NEMO was a French collective formed in 1972. Their line-up included François Bréant, the keyboardist and lead vocalist, already acclaimed musician on French prog scene (often collaborating with various members of MAGMA); Marc Perru on guitars and vocal duties, Pascal Arroyo on bass and piano, Clement Bailly on drums, Emmanuel Lacordaire on percussion and guitar, Ronnie James on trumpet, Albert Marcoeur on saxophones and clarinets (another unique avant artist), Claude Samard on dobro, Arthur Young on trumpet and José Bartel on tumbas and gongs.

The band released two albums, ''Nemo'' and ''Doin' Nuthin''' in '73 and '74 respectively. Their music will be appealing to one who like 70's funk and jazz rock, but with edgy experimentation meandering from avant overtones to classical harmonies. They disbanded in 1975.

A charming but totally forgotten little album, the self-titled debut LP by 70's French band Nemo is a pleasing mix of prog, funk, rock and jazz fusion. Founded by Francois Breant and ex-members of Ergo Sum and Cruciferous, the music is a little disjointed due to covering a wide range of styles, and although vocals are featured throughout, the album has several instrumentals and longer stretches where the individual band members get to really show their talent. Brief moments remind a little of Santana, while the upfront bass playing has an impressive Zeuhl-like tone.

Side A's album opener `Kick A Tin Can' is a perky and funky pop rocker with snappy playing and an upbeat but strong vocal. Great chorus, and the somewhat bent guitar work throughout gives it a slightly twisted sound. It's the least demanding piece on the album, but damned if it isn't immensely catchy, and you try not to smile at the infectious `Woo!' vocals in the finale! First instrumental `Obra Del Arroyo' has some wonderful grumbling Zeuhl-like bass in parts, commanding drumming and ragged fuzz-organ solos. The two part `Little Nemo/Jungle Jim' is one of the album highlights. Initially a drifting, dreamy and floating slow-tempo evocative piece with warm vocals and restrained percussion, it flows into a more forceful groove with glistening electric piano and tense guitar solos. There's some slightly cheesy lyrics in the second half, but not enough to let the track down. Tense instrumental `Call Me Friend Of Brian' has a typical heavy Santana guitar/percussion fusion sound, some more driving Zeuhl bass and aggressive dirty Hammond organ attacks.

Side B's `Straight Man' is a sleazy stomping funk popper with catchy melodies, effective group vocals and fat upfront bass. Sadly the album kind of bottoms out here for a while. The stop/start arrangement of near-comical `With Duane Again' has dreadful `super villain' lame vocals and is musically plodding and repetitive. The two minute `Attilah' is not much better, an attempt at a more humorous Santana styled poppy piece. Both of these tracks have organ/electric piano player Francois Breant on lead vocals, and he has an awful Randy Newman-like nasal quality. At least on this album he's a far better musician than a singer. The album is redeemed by 7 minute instrumental `Grandeur...', a showcase for the talent of the whole band, with each member getting standout moments. Mysterious keyboards in the ambient intro, then heavy builds with electric piano and driving percussion, forceful bass and distorted hazy organ, attacking drumming and wailing guitar solos finish the album in a hugely dramatic manner, just a shame about the abrupt fade- out.

`Nemo' is currently not available on CD, so perhaps listen to some online samples to see if you want to commence on a search for a vinyl copy! It's not an album I would go out of my way to purposefully track down, but if you happen to come across it at a decent price, by all means snap it up and enjoy it. I'm sure many prog/funk fans will find it a rewarding and worthy addition to their progressive music collection. Apparently the follow up album `Doin' Nuthin'' has an even bigger focus on instrumental pieces, so I'm on the lookout for that one myself.