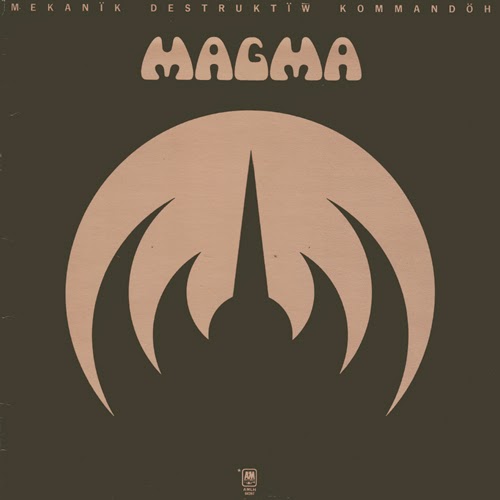 
Preheat the oven to moderate jazz, rinse the jazz in tribal chants and drain well, combine the mixture with some operatic vocalisations, and stir in a made up Teutonic alien language based on Orff's 'O Fortuna' from "Carmina Burana" over medium heat until completely immersed into the mixture, this will become Kobaian when it is thickened, then cover over with sporadic drumming and virtuoso musicianship, place in oven and cook until the cheese has melted through, any watery radio commercialism must be fully drained out, to serve, spoon the extra flavour of RIO and Krautrock, then top with slices of avant garde and a dollop of Wagnerian Opera, serve immediately. Enjoy your plate of Zeuhl.

My expedition into the murky Zeuhl territory began with Magma's live album that I half noticed in a specialist store. I was slightly disappointed at first as I hoped it would be accessible enough to enjoy. However, somehow the music has the effect of osmosis, it grows on you gradually creeping through your system transporting its gradient effect into your consciousness. The input of energy on this album, the ferociously original approach is astonishing. Nothing can be compared to Magma. 'Mekanïk Destruktïw Kommandöh' is hailed as a Magmasterpiece and for good reason. It broke down barriers of genre creating its own. Jazz infused rock opera would be one way to describe it but it is not sufficient as the language takes this to a different level. The otherworldly language of Kobaian is alienating but somehow appropriate. The iconic symbol emblazened on their shirts and albums is another aspect that seals the mythological essence of the group. An iconography creates that mystique that is so essential to the group.

The room goes dark as soon as you put this on and it is definitely not for the faint hearted. My family heard some of this and were more concerned than fascinated so I have been confined to earphone listening ever since. It is made for headphones too. Nightmarish music to immerse yourself in, with a disturbing edge could appropriately describe this music, although it may have the curious effect of being a source of uplifting encouragement to certain listeners. The tracks run together in a seamless epic. Depending on your mood at the time may depend on your overall impression; let the music take you into which ever direction it decides as personal interpretation is essential in the Magmaverse. The musicianship is tight as a drum and Vander is stunning on drums and vocals, his second instrument, he seems to be the face of Magma, the voice of Magma and the sound of Magma. On track one for example we have a lot of trumpets and a shimmering Hammond sound, I am not sure what it is but we hear chimes, jingles and happy organ. The guitar is very unusual as a background instrument, but the staccato hammering organ is a dominant force. There is a definite beat though it is sporadic.

The vocals are an absolute delight and you will hear Gregorian chanting, choral yelling, high octave shrills and deep resonances. You can even hear words that you think you recognise but it is all an illusion. On the first track for example it sounds like 'he pulls his pants off, he is seen at congress, he's fubar he's fubar, he's all tone deaf, he's a dunce.' Honestly it is that weird it is often hilarious. But the vocals are sung and chanted with such utter conviction it is quite chilling at times. Of special note are the high pitched soprano screeches, which are part of the sound on every album. Vocalists Stella Vander and her estranged husband are the centrifugal force of this album.

The voices are even weirder on track 2, Ïma Sürï Dondaï, and sound like 'We musn't raid our fire, we musn't raid our pools, please!' Then later, 'I never see, I never win, I never see I won won won,' then the females answer, 'baby the lotion, baby the lotion, baby the lotion...' there are huge sections of woodwind that is all over the place, jazzy and dislocated from any one time sig. The low bass is keeping some semblance of rhythm but it is as fractured as it can get. This is mesmirising.

The complexities of the polyrhythmic time signatures are intense, and at times the music takes surprising detours, such as track 3, Kobaïa Is De Hündïn, with sustained atonal chord progressions and tribal drumming metrical patterns. The piano is a real feature on this too and I particularly like that relentless droning sound that becomes almost subliminal but is everpresent. The female vocals caress the sound with strange words 'manamanamana, oooooooooh oooooooooooooh oooooooooooooh.' They gradually build to a crescendo until the beat breaks into a German sounding chant: soundslike 'Oz is dark for those who dare'.

The next section on track 4, Da Zeuhl Wortz Mekanïk, is very memorable as I heard this on the live album, the female chant is overpowering: 'Is he single for he's so hot.' The repetition is entrancing. This is my favourite track on 'MDK'. There are staccato stabs that darken the sound and these are contrasted by very light passages of minimalist strings. At one point the females sound like they are going into a painful frenzy.

Track 5, Nebëhr Gudahtt, settles into an ambient guitar and piano minimalist passage, there are no words for a time until Vander decides to mutter some unintelligible mumbo jumbo. A soprano gives out disturbing bird calls, the contrast of light and shade are astonishing. Beauty and the Beast. The vocals become screechy and tortured, screams of terror and a repetitious mantra of female choir voices. This is the dark nature of Magma and could send many music listeners running for cover. The section at five minutes in I must admit is chilling to the bone, some of the scariest music you will hear. Though I guarantee a lot of listeners will find this hilarious as it is so over the top. The Vanders scream until their throat is red raw.

Track 7, Kreühn Köhrmahn Iss De Hündïn, ends this album with a slow somber but majestic ascending operatic piece. The choir sound like: 'Soon it's very very soon'. The drums are fantastic on this, very tribal and layered with woodwind effects. It is anti-music atonal jazz, the ear simply resists this and the way Vander groans and shrieks is unsettling. It ends on a high pitched piercing beep. Wow, we got through it.

Vander is the sole writer and it is good that he can secrete his creative juices on this otherwise he may well be locked in an asylum somewhere. I am reminded of Henry Cow at times and even King Crimson or Zappa or The Residents, but Magma stand alone and proud as their own entity. There is extreme repetition which may turn many off but this is hypnotic and compelling. It is soul stirring stuff and wraps itself around your cerebral cortex until you are addicted. The only thing left to say is once experienced, never forgotten. Magma have opened up a whole new realm of music. Try the delicious recipe for yourself and you may well enjoy the taste.