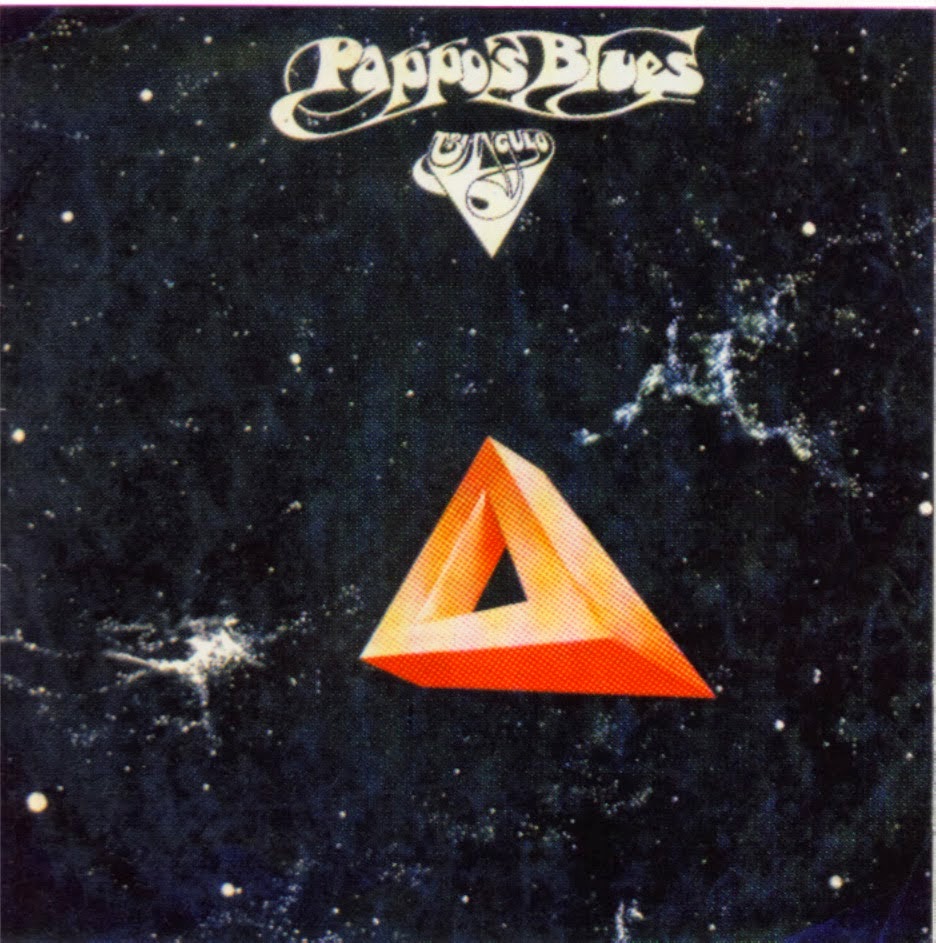 "Pappo's Blues Triángulo" is the entry to the strangest epoch of this guitarist's sound and style, and of the Argentina's history.
The context and environment when this "Triángulo" (aka Vol. 5) was released, was marked by politically turbulent times in Argentina, 1974, the aged president Juan Peron died, and his second wife and vice-president, Isabel Peron, assumed the presidency trying to fill some shoes which were too big for her.
The economy was quite well-managed, with a reasonable social justice, but the violent atmosphere impelled by some terrorist groups, plus the impotence of the government to control them, paved proper road for a crude military intervention a short time later, in the early 1976, regime which entitled itself as "bastion against the communist menace in the zone" (government that would last til the War of the Falklands, in 1982)... unfortunately all these military dictatorships were devised by the CIA, which makes us think that, perhaps, the worst South American Fascists were an American creation.

When this album was released Buenos Aires was a rarefied city, the social-political atmosphere was volatile and any unexpected thing could happen, there was a violent and sudden devaluation of the currency in 1975, and many people lost their savings... the final economic collapse brought a violent change in a country that would walk toward dark years.
Pappo, born Norberto Napolitano, family of Italian immigrants, modest working class, he started playing guitar when he was very young, in the mid-60s, and also some piano that his older sister taught him.
Impelled by his enthusiasm about the blues, and especially the 60s and 70s blues rock, he forged a style, simple and robust at the same time, where the psychedelia of Jimi Hendrix, and finally Black Sabbath and Jethro Tull, would configure this sum of things that Pappo was, and so he started in the artistically improbable Buenos Aires of the late 60s, briefly in a band called Los Gatos, and then, going ahead with his Pappo's Blues.
This album from the mid 70s was called "Triángulo" (because Pappo's Blues was a trio), and it's actually the first album of the band featuring a title on the cover.
The first tune "Malas compañias" is a dense hard rock with long instrumental passages that flow into "Nervioso visitante", a sombrous and creepy instrumental that starts with a little sound, and derives into the camp of the jam band and the experimental, with a solid base giving support to the Pappo's fingers, which walk over the strings like two schizoid spiders.
The side one is closed with "Mirese adentro" (Look at yourself inside), similar in structure to the first track, but shorter, and featuring a good portion of mystical lyrics:

"Hubo distancias en un curioso baile matinal", is just a 14-minute song divided in two parts, with excellent performance by Eduardo Beaudoux & Eduardo Garbagnati on bass and drums... the song ends in spasms of exhausted Gibson Les Paul.
Towards the end is "El buzo" (The diver), weird acoustic song played with a Spanish guitar only, backed by creepy voices and laughter intertwined with incomprehensible words that barely can be heard, bringing the LP to an end with phantasmagoric mood.

"Triángulo", along with "Vol. 6", are both the cursed diamonds in the Pappo's Blues discography, but this one in particular still stands there like a dark secret, dark like the social and political context from which it emerged.