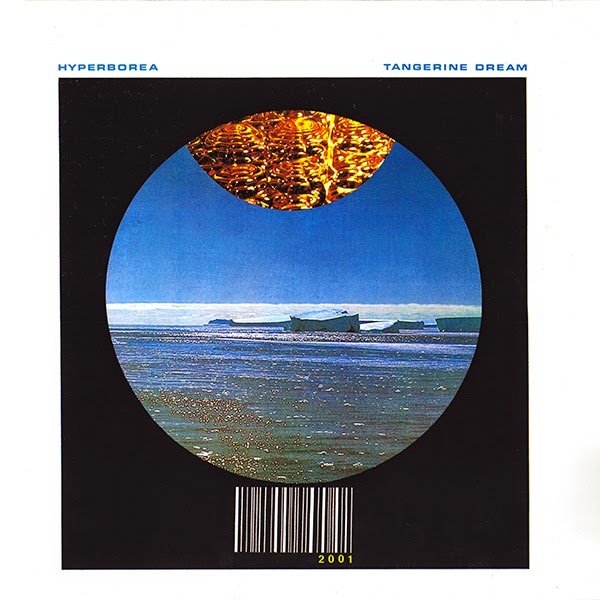 Total Time: 41:34
Here we have the final product which brought a ten year collaboration between Tangerine Dream and Virgin Records to an end.

As their final work for Virgin, TD delivered in 'Hyperborea' some of their best material during the Schmoelling-era (in my opinion, only second to both 'Tangram' suites). Since 1980, when Johannes Schmoelling joined forces with the Froese/Franke duo, the trio had put a remarkable emphasis on the electronic aspect of their music, while keeping the melodic sensitivity they had been cultivating from the mid 70s onwards. Schmoelling's obsessive penchant for synthesized samplers and rhythm sequences allowed TD to draw themselves stylistically close to the musical patterns of techno-pop that was so popular and recurrent in the FM airwaves of Great Britain, Continental Europe and North America's West Coast in the early 80s. But of course, TD still managed to keep their own touch of sophistication and eerie inventiveness through all this process of modernization. Three of the four tracks comprised here exceed the 8 minute duration, and show a high level of musical creativity and a clever use of keyboard textures. The only 4- minute track is "Cinnamon Road", a catchy exercise on danceable, nice technopop: it actually fills the purpose of giving a fresh air of lighthearted stuff among the more solemn remaining repertoire. 'No Man's Land' kicks off the album in a most energetic way, with an African-like massive drum sequence synchronized with a Pan's flute sampling - something odd for TD patterns, since their albums usually kick off with languid opening motifs. The ethnic drive of 'No Man's Land' is handled with not too many variations, managing to avoid monotony, evocating some kind of ritualistic dance instead. The title track incarnates the most mysterious and pompous part of the album, both captivating and melancholy, as if it were an intimate look towards the heavens (Hyperborea is the celestial superior world in the Ancient Greek mythology): the two motifs that are linked in this track are based on simple, yet effective chord progressions translated into lush and eerie synth layers that at times almost seem to "whisper" to the listener's ears. Finally, the 20- minute suite 'Sphinx Lightning' fluidly recapitulates the mystic spirit of 'Hyperborea', the ethnic flavours of 'No Man's Land', the inscrutable synthetic paraphernalia of their 74-76 albums, and the symphonic elegance of 'Force Majeure', all throughout its five sections. Of course, the synth interplay and sound production forbid the band to look back to their old days so they may focus on their present orientation: yet, it's inevitable to refer to those albums aforementioned when listening to his piece.