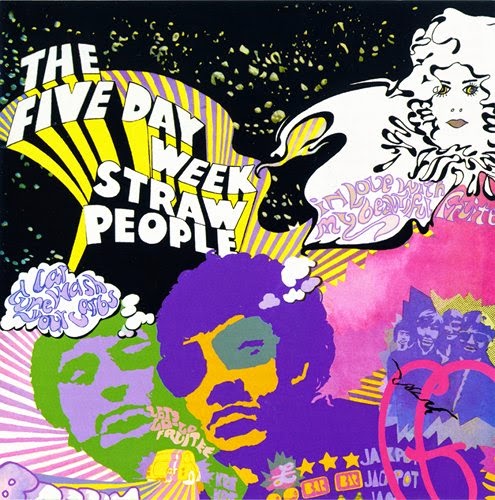 It’s easy to see Five Day Week Straw People as a victim of the times, wrapping themselves in a mile long moniker, keeping company with other like minded time travelers lost to the eons, fellow grandiose name-bands like The Experimental West Coast Pop Art Band, The Electric Chocolate Marshmallow Raincoats, or Strawberry Alarm Clock.  However, this one time cultural icon and stuff of legend, like their counterpoint, The Chocolate Watch Band, who’s material is spotty at best, is much more memorable for the direction the individual members would later take, than the material presented here.

To their credit, they’ve created an adventurous concept album revolving around a the weekend of a typical working class British family ... instantly bringing to mind the song “Dear Diary” by The Moody Blues.  Recored in something like four or five hours in a London classroom, it’s easy to hear a lack of cohesiveness, not to mention the fact that it’s rumored that Jack Collins had never heard any of the songs prior to the recording session.  Never the less, this self titled album is highly prized by collectors as it reflects a moment in British flower power psychedelia that was here and gone like dandelion seeds on the wind.  Five Day Week Straw People do have some stunning pop elements, though rather than embracing the Mod side of the times, they’ve jettisoned themselves toward the more heavier rock sound that would become known as early heavy metal, sparking memories of Cream, filling their songs with bantered lyrics, harmonies, and a sense of story telling that requires attention to detail if you wish to gain access to this psychedelic opus ... one filled with acid fuzzed guitars, a sustained bass, intoxicating effects driven vocals filled with reverb, and drumming that could have taken place at no other time in musical history. 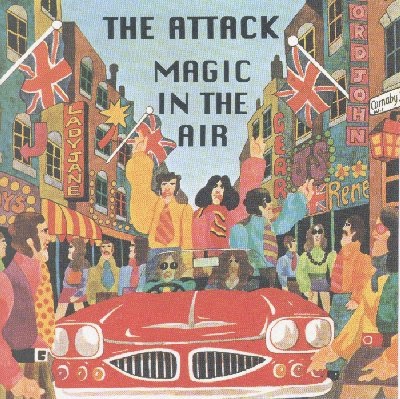 On The Atack tracks:

Sounding like they might have been an amateur battle enactment group , but no , the ATTACK had members who went on to join the NICE , the MARMALADE , THIRD WORLD WAR , and eventually were to become those stonking rockers ANDROMEDA . They recorded four or five singles , and an album ‘ The Roman Gods of War ‘ was planned and begun work upon , but was never finished or released . They did a version of that rip - roaring rocker ‘ Go Your Way ‘ later to be re-done as ANDROMEDA . The ATTACK looked absolutely in - fashion , with three - quarter length embroidered silk jackets , frilly shirts , and MONSTER sideburns .

‘ Magic in the Air ‘ , their magnum opus , starts off with a music box then pounds in with some power chords and Entwistlean bass runs . It’s a catchy powerpop number . They exude a juvenile enthusiasm that is endearing though if I’m honest I find some of ther lyrics slightly daffy . They are redeemed by their verve . Their version of ‘H i ho Silver lining’ is good and was released a few days before J. Becks , but theirs never got a look in . The first real kicker for me is ‘ Try It ‘ , which really suits the singer’s style , and they belt it out with all their might - a slightly naughty number which must have upset parents everywhere , what with the permissive society and all . Lively riffing peppers their other tracks , they seem a band yet to realise their potential and maturity . ‘ Any more than I do ‘ really rocks though.....” you can’t want that kind of love any more than I do.....’’ Ahem....No sex please - we’re British . ‘ Strange House ‘ alludes to some weird psychedelic goings on in a house...”.beds in the garden with no springs or legs....cellar on the top floor....a table upside-down...tea in aclock....” ....You know the sort of thing , do you not , trike-bound traveller ? Also you hear John Du Cann come in on vocal for just a few verses . How about ‘ Neville Thumbcatch ‘ ? - a real period piece , and hard not to love . One of their best must be ‘ Go your Way ‘ to be later redid by the mighty ANDROMEDA.....see their page pop pickers !