Aphrodite's Child
1968
End Of The World 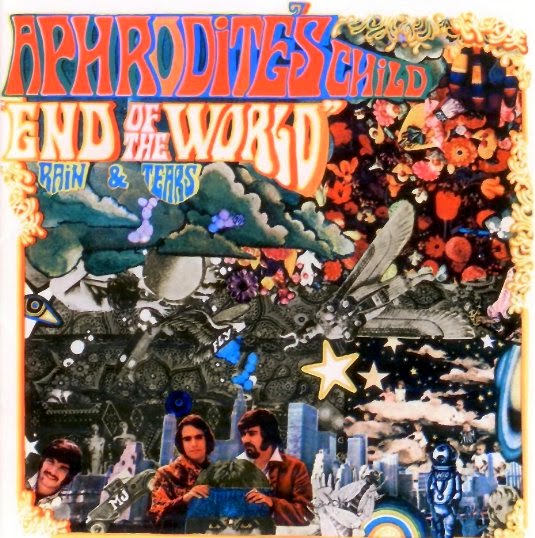 The short story of APHRODITE'S CHILD starts in 1968, when the Greek/Egyptian bassist and vocalist named Artemios Ventouris Roussos (Demis Roussos) and the powerful drummer Lucas Sideras were supposed to meet the multi instrumentalist Evengelio Odyssey Papathanassiou (VANGELIS) who had left his first group FORMINXS, but the first two were not admitted to the United Kingdom because they had no working permits but custom officers discovered photos and tapes in their luggage so they assumed the musicians intended to stay.

A few months later the three musicians join in Paris with Anargyros Koulouris (Silver Koulouris) a very competent guitar player and they decide to form a new band which was supposed to mix traditional Greek music with Western Pop and Psychedelia, but they ended doing much more than was expected.

Due to their financial situation they had to sign a terrible contract with a record company. Soon after the birth of the band, Silver Kouloris has to leave the group because he was called for his Military Service and only joins again for the recording of their last album 666, during these years Demis Roussos has to play guitar and bass.

Their first two releases "End of the World" (which includes two hit singles, "Rain and Tears" and "I Want To Live", the last one reached N° 1 in most Europe) and "It's Five O'Clock" showed a commercial oriented band with a very peculiar sound, but it's not until 1970, when they start to record the brilliant and adventurous "666" that they get a place in progressive Rock history even when the relation inside the band was at the lowest point, mostly because VANGELIS wanted to do more serious music than Lucas Sideras and Roussos.

The paradox is that this masterpiece which combines 100% Symphonic structure, British Psychedelia, Greek Orthodox Religious music with a touch of pop was only released in 1972 (after the band had already split) due to several reasons like the controversial concept ("The Book of Revelations"), the confession made by the band that "666" was conceived under the influence of Sahlep (some people believed this word was referred to some kind of pagan divinity when in fact it's a common non alcoholic beverage from Turkey) and the track "Infinity" sung by the great actress Irene Papas which is really a five minutes orgasm.

After APHRODITE'S CHILD disbanded, the members took different paths, like Roussos who became a well known pop singer and VANGELIS who is still a respected Progressive/New Age artist, but none of their later works will have the importance of "666", an Icon of Progressive Rock and one of the first conceptual albums in history.


Let me mention one thing with these Aphrodite's Child reviews : I tend to like their melodic and pop songs quite a lot. They have filled my ears when I was not even a teenager.

The title track sets the pace for this style. A great pop ballad tinted with some sweet psychedelai. But this album shows many facets of this band. Their fully psychedelic sound (but who didn't release psyche songs in 68?) with "Don't Try to Catch the River". Their folk orientation with The Shepherd and the Moon and "Mister Thomas" (which sounds pretty childish and not very interesting).

But even while they play their pop influenced songs like "Rain & Tears", they inject such a great melody and nice keys that I just can't help : I like it very much.

A song as "The Grass Is No Green" is more elaborate and combines psyche and folk influences. Not a fave of mine because it sounds a bit hectic to my ears but some might like it for these reasons.

The Shepherd and the Moon and Day of the Fool have some similarities with Floyd which might surprise more than one proghead.

This album is not a brilliant one but still it is original. Just remember that it was released some forty years ago and that rock music in Greece was not a usual concept in those days (and still isn't). For these reasons, I will rate this work with three stars; but it holds average music like "You Always Stand In My Way" (even if it is one of the very songs that rocks)