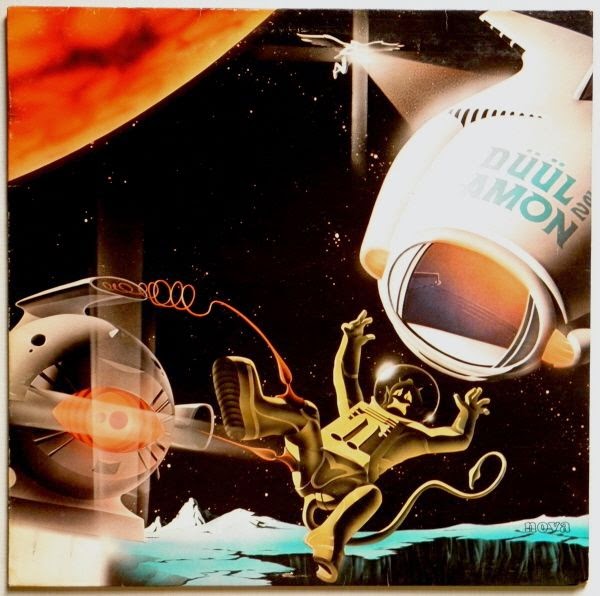 
For this album, the core members of Amon Duul II were still present, but intrusions from a plethora of 'outsiders' has seemed to have dragged some of the music down the pathway of mediocrity by incorporating un-necessary sonic colour, such as pompous string arrangements to certain tracks, which sometimes enhances, sometimes doesn't.. Bassist Lothar Meid is great on his instrument, although I'm not a big fan of his voice (or is it just the 'mix' of his voice - it's always loud). He dominates side 1 of the record, not that the songs are particularly bad, just a bit bland. 'I Can't Wait - 1 & 2' starts off a little uncertain and unsure of where to go but the 2nd part features some spacey synths and a great Bass-line. Very 'hip' sounding. 'Mirror' is a song that just doesn't work - pure, standard rock-music, with some shrill 'chipmunk' backing vocals - not the sort of thing we expect from this great band. 'Traveller' bounces along in a 'cosmic-country'-ish sort of way, nice to hear Renate Knaup at the mic again, and includes some colourful clavinet playing. Meid's 'You're Not Alone' is majestic and grandiose, with tasteful Soprano Sax solos from Olaf Kubler, quite an accessible tune, too, but one can't help but think that the musicians here were capable of much more.

Side 2 shows off a more eclectic run of songs ; 'Explode Like a Star' is quirky, reminiscent of the previous studio album 'Vive Le Trance'. The 7min+ 'Da Guadeloop' is a sensational piece of music - a percussive show-case with interesting Bass playing, the string parts work well, the 2 guitar solos are exciting, and various sound effects are used in the right place. Possibly the best track on the album. 'Lonely Woman' is a smooth, sleek song, more French sounding than German, great rhythm - it's pure enjoyment. 'Liquid Whisper' is a dreamy, mellow tune, with Renate singing again. Final song, 'Archy The Robot' is somewhat directionless, and suffers from a goofy Brass arrangement - not the ideal way to finish off an album, it tends to leave an unsavoury taste in the mouth. Still, 'Hijack' is, for the most part, a pretty good listen, though not definitive.