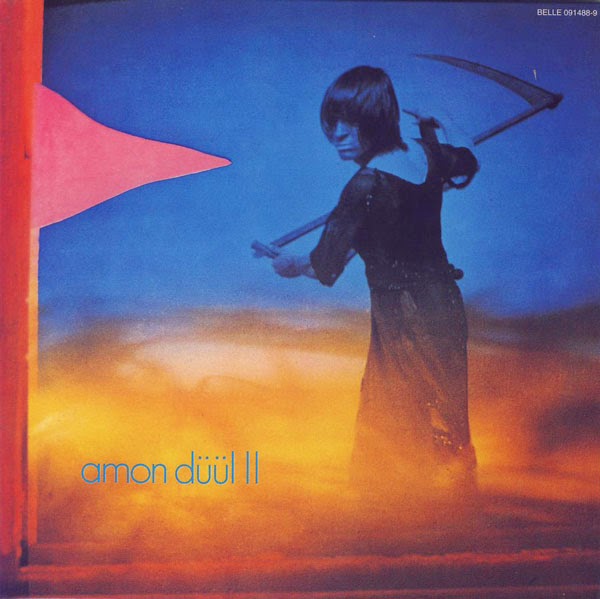 
After their stunning Phallus Dei debut album, ADII could only up the ante with the voluminous Yeti album, a double disc affair that was filled with a live jam for the duration of one disc. Again released on the Liberty Records label in the early part of 70, graced with an ape-grim reaper outer gatefold and a shrine-in-heaven inner gatefold artworks (both again courtesy of KB-man Rogner), Yeti often comes within the top 5 Krautrock albums listed. Original drummer has now left leaving Peter Leopold (of AD1 fame) the stool and guesting on the Sandoz In The Rain closing track is part of the AD1 line-up (3 of the 6 members).

Opening on the uber-fantastic Soap Shock Rock, AD II strikes just as hard as they did in PD with Kanaan, but here the 14-mins four-part suite is the album's absolute highlight. The eastern-folky 4-mins She Came Through The Chimney is quite a change SSR, sounding like Comus mating with Quintessence, with Karrer's violin sounding like High Tide's Simon House. If you'll make abstraction of the Eastern flavour of Chimney and Karrer's violin, you'll find Cerberus is much in the same folky vein, as well, a tad more Comus-like, until the fuzz guitar gives it an unlikely electric finale, which suits my ears just fine. Renate gives a weird vocal overtone to Archangels, a track hinting at later albums (Carnival and Wolf City), with some huge riffs and makes this song one of AD II's harder rocking tracks with the short proggy guitar-laden Return Of Ruebezahl. The following Eye Shaking King is the album's second highlight and one of the band's better-known tracks, with an immediately recognizable riff, a searing & soaring guitar solo and filter-trafficked vocals. The aptly-titled Pale Gallery is somewhat of a filler, even if it offers some downright trippy/spacey soundscapes over a repetitive beat.

The second disc (speaking of the vinyl, as the Cd version is crammed into one disc) is completely different, spreading lengthy loose spacey jams over two sides, which contrasts quite starkly with the first disc's relatively tight songwriting and playing. While the first disc was relatively hard rocking, this one goes to great extent into space rock, somewhere in the region of the Saucerful-era Pink Floyd. So Yeti is overstaying its welcome a bit, yet its companion piece Yogi does more of the same. Definitely toking music. But for the closing Sandoz In The Rain, AD II is joined by AD1 members and the resulting track sounds very much like the Paradieswärts Düül album of the other section of the commune. BTW: Sandoz is the name of the pharmaceutical labs that developed the LSD. With its light folky acoustic feel and a cool flute, Sandoz is Yeti's third highlight and a charming closer.

Yes, ADII had managed to top their debut album, but it was a tough task, needing a double disc to manage it. And if most progheads would agree to Wolf City and Carnival in Babylon being their best albums, this reviewer is much more inclined to the first three albums that we should call the Liberty era. Soon after Shrat and Dave Anderson would leave AD II (bound for Sameti and Hawkwind, respectively), leaving Lothar Meid to fill up on bass, but the former would not be replaced and the group would go on to record the third album in their Liberty Records trilogy TDL, which would go on as yet another seminal Krautrock record. Just as essential as Phallus Dei, this one is a bit more diluted, but then again there is more goodies as well.
Posted by Unknown at 11:07:00 PM