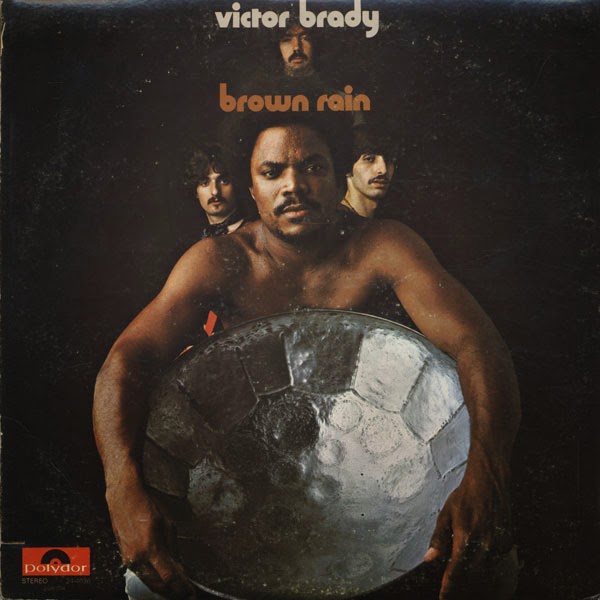 Victor BRADY hails from St. Croix in the United States Virgin Islands. He moved to mainland USA sometime in the 60's, and established himself as a popular and influential performer of the steel drum, performing in Central Park on a regular basis. Brady himself doesn't quite like the notion of coining his instrument of choice a steel drum - for him that is a cruder instrument consisting of a large 55 gallon steel barrel. Brady prefers to call the more refined instrument he plays a steel piano.

Anyhow, his steel drum performances were popular, and he soon became something of a tutor of the instrument - many performers of steel drums today can thank Brady or one of his students from the 60's and 70's for their skills in performing on the instrument.

Although mostly performing live outdoors or in special events, Brady got the chance to see his work issued on albums as well. In the late 60's he played on Scott Fagan's album South Atlantic Blues, and at about that time a talent scout from Polydor was suitably impressed by Brady's performance to offer him a record deal. The result was the album "Brown Rain", released in 1970. On this effort his steel piano was blended with a psychedelic form of heavy progressive rock, a stylisitc expression popular at the time.

In 1976 he would release another album, this time on New Your based Inner City Records. This sophomore effort, "Classic Soul", will be less interesting for those with an interest in progressive rock. But those with more than a passing interest in the steel drum as an instrument should find Brady's take on the classical works covered on this album to be a fascinating sonic experience.

And while not recording any more solo albums Victor Brady kept going as an active performer of the steel drums, with a strong reputation among fans and performers of this instrument. He is still around and doing well.

This one seems to evoke some pretty strong reactions from those who hear it. Upon first listen, my good buddy (who is not a particularly big fan of prog.) literally begged me to get rid of it, so strong was his dislike. I, on the other hand (a big fan of prog) found it quite interesting, if not very different than virtually every other prog/hard rock album out there. According to the liner notes on the back cover, Brady, an accomplished steel drum player, travelled from his native St. Croix to NYC. Once there, he attempted to form a rock band showcasing his talents on the steel drum, but succeeded only in "annoying" the local music scene.

Dissolving his band, he began performing in Central Park, where he caught the ear of the president of Polydor records. Intrigued, he signed Brady on the spot. A studio band was assembled, and an album recorded. It features fairly hard prog rock, with heavy guitar and lots of Brady's steel drum, and even some fuzz at various points. There is a mix of light and heavy material. The 11:30 min. title track was the best to my ears, which I rate very good. Three of the remaining five tracks garner a solid "good" rating as well. If your open to new and unusual sounds when it comes to your rock 'n roll, this may be worth investigating.

I just love this album... It gives me a warm fuzzy feeling and never fails to make me happy. so I thought it would be a great one for post 1500!