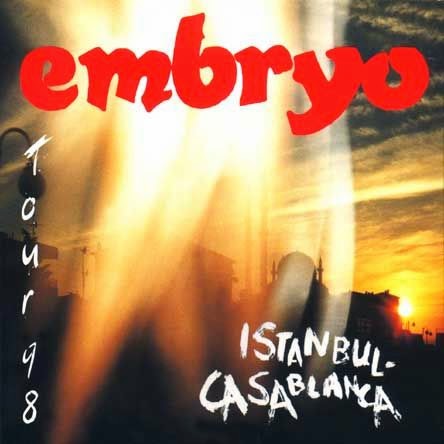 Celebrating Embryo`s 30th birthday this is the group`s 22nd release containing 23 pieces of music varying from rhythm`n jazz fusion to free-form improvisation, from highly sophisticated studio sessions to ethnological field recordings. Very much like the legendary „Embryo`s Reise" this double CD documents the musical adventures of Embryo in foreign countries (this time they were travelling in an old ambulance truck mainly in Italy, Greece, Turkey, Spain and Morocco). The two discs feature dozens of meetings with remarkable musicians - recorded on the road in various clubs and concerthalls, and also in the notorious Studio Renk in Istanbul. Some of the sessions were later overdubbed in a studio in Embryo`s homebase in Munich, resulting in melting pots of styles and cultures that are truly not from this world. Among the prominent guests on this CD are Ross Daly, Roberto Licci - stars in their own right in their respective countries - Okay Temiz and Mahmoud Gania. The last two symbolize in their personalities and musics the cultural range Embryo deal with during their journeys. Masterpercussionist and bandleader of the famous group Oriental Wind Okay Temiz is a Turkish cosmopolitan who for many years has lived in Scandinavia. Although deeply rooted in his culture and playing with the best Turkish musicians, he always tries to transcend regional and national cultural borders in his strife for a music based on worldwide communication. No wonder that his closest step to fame in the Western music world was a collaboration with the godfather of contemporary ethno - jazz - fusion Don Cherry. On the contrary Moroccan Master Gnawa musician Mahmoud Gania neither left the tradition he grew up with nor bothered to tinkle with instruments or musics from other cultures. Although he hardly ever leaves his native country he is always open to musicians with other cultural backgrounds that cross his way. Even Jimi Hendrix once payed him a visit to learn from him. You might find some recent recordings he did with Randy Weston or Pharoah Sanders to name some of his activities. The Embryo group touring consisted of Christian Burchard, Lothar Stahl, Jens Pollheide, Xizhi Nie (the Chinese multiinstrumentalist is playing since four years with the group) and Karsten Hochapfel. During studio sessions in Munich they were joined by friends and „historical" members of Embryo: Roman Bunka, pioneer of European oud playing, Dieter Serfas, ex - Amon Düül II - drummer, with his self-constructed talking drum, there are extraordinary contributions by sax legend Alan Praskin (check his just rereleased recording from 67 on the ESP label), and Embryo co - founder Edgar Hofmann (on various reed instruments), bassoon virtuoso Alexandr Alexandrov and trumpet player Jurij Parfionov, who was voted `musician of the year 1998` in Russia (both are members of the post - folk - avantgarde group Tri-o from Moscow).