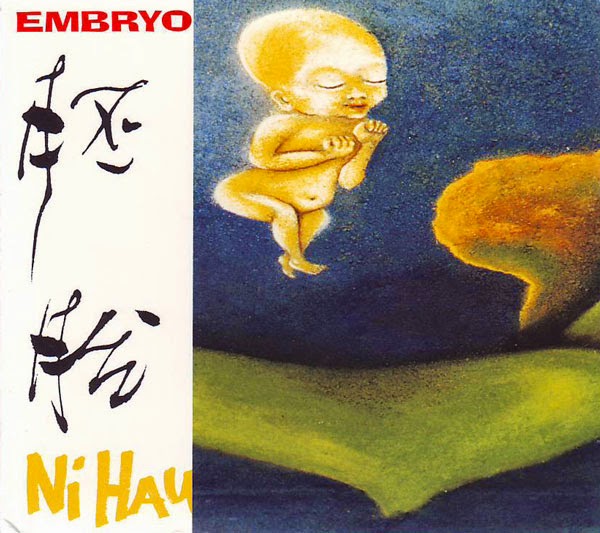 Well part of me is a little bonkers, and whether or not that colours my views on music or not, I leave entirely up to someone else. Well you certainly don't need to be mad to enjoy this music. Ni Hau is through and through a highly melodic album. The real part of the genius though, is how these melodies are crafted. Main man Christian Burchard, whom I've always had a huge sweet spot for, has for this 1996 recording assembled all kinds of exotic percussionists and endemic Eastern instrumentalists. This isn't just Chinese infusions we get here, there's also oud, tabla, tavil, nai, harmonium, marimba and the list literally goes on and on.

Chinese musician Xizhi Nie is in charge of baffling instruments such as ehru, muyü, sheng and gaohu. Now I have absolutely no idea what these instruments look like, but I'm guessing that these must be the ones responsible for the musical phrasings that take me straight to the heartland of the panda.

All in all Ni Hau is a real get together of incredible musicians from across the world. Burchard's even managed to shanghai fellow German compatriots Roman Bunker on sitar and oud, who also played with the group on their seminal We Keep On, Chris Carrer on oud, as well as legendary synth and electronics wizard Peter Michael Hamel off of experimental act Between. So basically what we have here is some kind of Krautrock super-group coming together in order to make music deeply inspired by the cultures of China and Mongolia. There's still an ounce of fusion in here though masked incredibly well behind that easterly silk veil.

A track like Sehen/Sikahbines in Shan Dong brings in one Chuck Henderson and his soprano sax, which he plays like a frantic snakecharmer with a cobra in his trousers. Suddenly we get real tangible "jazz-rocking" textures - Burchard starts a whirlwind on the cymbals - the viola develops a snarling feel - the bass gets right up in your face, while the rest of the band joins in to create a tantalising slice of ethnic fusion that entices you for nearly 10 minutes. To the top of the yellow mountains and back.

As with most of Embryo's output since the ethnic powerhouse album of Reise, Ni Hau is fuelled by rhythmic instruments. Burchard, in particular, has an ingenious way of playing that comes off so fluently, that it'll have a dudette like Ruth Underwood running for the bushes. It's uncanny just how much umphh and zing you get from his marimbas. Coupled together with a precise, and at the same time, constantly shifting tidal wave of galloping percussion features, this album mimics the ever beautiful shades of the far east in rhyme and reason, even if one leg at all times seems to be heavily planted in the Embryo past. I'm not sure how else to describe it, but Embryo's key feature was always that unique way around rhythms and melody. On Ni Hau this feature feels forever multiplied in a gorgeously vast oceanic landscape, where majestic water buffaloes peacefully roam the mosaic beauty of the rice field terraces.