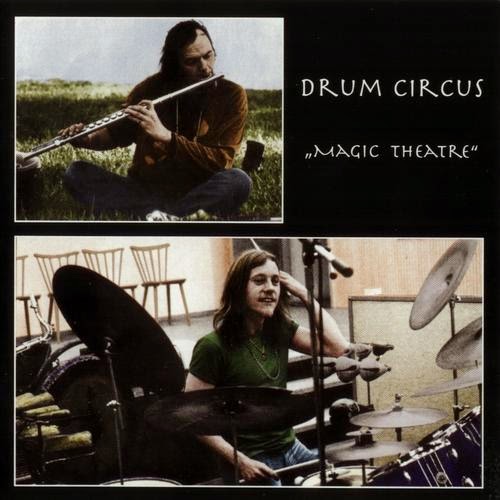 Founder and leader of Drum Circus from Switzerland has been the master drummer Peter Giger. "A giant on drums", as the newspaper "Rhein-Main-Zeitung" called him. He was joined, among others, by two additional drummers, as well as by Joel Vandroogenbroeck and Carole Muriel, both from Brainticket. Therefore, it's not surprising that "Magic theatre", with its LSD-dripping lyrics (partly written by Timothy Leary, partly influenced by "The Tibetan book of the dead"), reminds sometimes forcefully of the early Brainticket. "Magic theatre" was recorded in the excellent studio of Horst Jankowski in Stuttgart. Yet, it remained unreleased, then. Shortly before his death, Horst Jankowski gave the tapes to Peter Giger. The front cover shows Peter Giger on drums and Joel Vandroogenbroeck

This Swiss psychedelic classic dives directly to a dense jungle of groovy and exotic drum-dominated sounds. The first long song filling the A-side of the vinyl does not contain very solid compositions, but is more like a college of freely flowing tonal associations. A web of synth layers hover upon delicate percussive tingling, and as mysterious flute sounds unite the music, creating a slight association with Ralph Towner's Solstice's "Song of the Shadows" feelings. Marching and recited declarations for the quest of consciousness expansion follows. I was quite delighted by phases where the lady narrator describises what I "must realize". Later the flow streams as pretty Indian-flavored sitar and vocals scenario. A free jazz turmoil is then introduced, in vein of Ornette Coleman's classic style, strengthened here with keyboards and poems, reminding bit the "Dental hygiene" cartoon from Frank Zappa's "200 Motels" movie. Crash of gong announces the returns back to India, where laid back flute and drum activity is enjoyed. Soon tender upright bass and classical jazz piano calmness create beautiful basis for a lovely saxophone and percussive theme, a sound texture I have heard on Bill Bruford's latest Earthworks albums. At the end of the long song the trip returns to the starting point battering and hippie teachings.

On the B-side song "Now It Hurts You" focuses to ethnic drums, sitar, hazy synths and echo-treated vocals, which orientate towards hippie rock melodies, achieving quite interesting mixture of divine feeling and chaotic jazz passages. Quite minimal from content, but pleasant innovation. "Papera" blows some euphoric jazz with piano, saxophone, layers of chimes and bass, diving to really beautiful pool of calmness. This tranquility shifts as more groovy lounging with powerfully driving drum and melodic saxophone theme. Following "La-Si-Do" builds up from careful chiming revealing soon the huge drum arsenal, and reciting praising the chemicals developed by doctor Hoffmann are presented. Apparently with these fellows this substance did not create an unclear state of chaos, but instead beautiful jazzy pastures. A quite short and distracted idea musically however. "Groove Rock" is very powerful drum-driven jazz track, and one of the most favorite tracks for me on this record. This great free jam flow reminds in my opinion quite much the awesomeness familiar from Miles Davis' "Bitches Brew" record. Final song "All Things Pass" lingers as an open jazz passage, where most fronted piano and bass are relived from restraints of rhythm. At some moments the song morphs as soulful tune with more solid sequenced form.

So "Magic Theatre" has strong jazz leanings with notably powerful drum presence are adapted here to the free flow of psychedelia. Also the ethnic capabilities of psychedelic music are explored, and thus I believe this record is very recommendable for fans of jazzy vintage hippie music, if the mind is open for more vivid chaos of musical evolvement. Melodically the music is very pleasant, and there are not very challenging avantgardistic tonal "difficultness" found from this album.